Choosing a major isn’t as simple as deciding between Einstein Bros. Bagels or Mein Bowl in the Student Center. Today, students are changing their majors, multiple times, more than ever.

Vito Balice is a junior here at Temple. Originally a political science major at Wilkes University, he transferred here in Fall 2008 to study criminal justice. 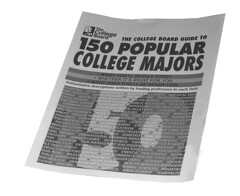 “The decision was very quick for me, almost instantaneous,” Balice said. “I have always been interested in law, and after taking a criminal justice class at Wilkes, it seemed like a more direct route than political science.”

Some, like Balice, decide early on that they are unhappy with their areas of focus. Others do not realize their happiness until they have been in college for four years.

The American society is experiencing a new shift in terms of the workplace. As recently as 20 to 30 years ago, Americans trained for a specific career or career field, preparing themselves for the 9-to-5 workday. It still exists, but it is not nearly as common as it was back then.

Research shows that anywhere from 44 percent to 50 percent of undergraduate students switch their majors at least once, which does not include those pursuing graduate degrees in separate fields from their college majors.

Studies have shown Americans switch careers anywhere from four to seven times before they retire. Within those careers are countless job switches.

This “multi-degree” approach exists for many reasons. Some major in the performing arts but obtain a second degree, often in education, in order to make money while they are not performing.

Some double major because they really can’t decide which one they like more. One may have a passion for art history but may be really good at physics. That person may switch between the two fields throughout their life, or find ways to combine them.

Some use one major as a piece of information and the other medium through which to express it. For example, one who really enjoys Japanese culture might major in Japanese and minor in film. This would allow them to fluently communicate the culture of Japan to American society, or vice-versa.

Dr. Michele Reich, a Philadelphia-based psychologist, explains where much of this indecision comes from. People don’t think for themselves or make their own decisions anymore in part because of technology, she said.

“Decisions that are personal are now posted on Facebook so that friends can decide,” Reich said. With a hollow laugh she then recalled one of her friends posting “What should I name my child?” as her Facebook status. Reich said she thinks decision-making now rests more on a societal level.

Students in the early 21st century are not being prepared as much for “the real world” as their parents were. Adolescence now continues into college and doesn’t really end until students get into their careers in their late 20s or early 30s. In short, students tend to be pampered longer, cannot think as much for themselves and are more apt to changing their minds later in the game.

Another factor is the pressure to “decide.”

In an increasingly fast-paced world, students are not given as much time to explore their different interests in high school. They are too busy worrying about SATs, college essays, AP tests, extracurricular activities and community service. Many rarely make time for themselves and can be pigeon-holed into a career field too quickly.

If a student were to open up a catalog 50 years ago, she would not see the lengthy list of majors offered at universities today. A boom in technology and globalization has created careers such as a video-game developer, computer software engineer and translator.

Rachel Yudell, a counselor in Temple’s Career Center, said “multi-potentiality” is another reason students switch majors. She stressed that they are given so many options and so much information that it is often difficult to handle.

But while some fear it is too much, others welcome the choice.

“Most my age, in their mid-30s, have already gone through multiple career changes,” Yudell said.

As opposed to the traditional “working up the ladder” approach to a career, many today are choosing to move in a horizontal manner to try different fields.

Yudell said she strongly recommends anyone re-evaluating his or her major or career field to come meet face-to-face with a counselor in the Career Center.

After the initial interview, the Career Center offers students personality tests in order to help them see themselves on paper. After these self-evaluation results come through, the counselors sit down with the students and explain what the results mean.

The purpose of these tests, however, is not to tell students what to do with their lives. The tests serve to give them a comprehensive understanding of their wants, needs and interests.

Many careers, especially in the arts and some of the liberal arts, do not even require their employers to have a degree in that field. It is not required to have a degree in acting in order to be an actor, for example. For these types of careers, college is more about gathering knowledge, developing skills and networking.

Matthew Flocco can be reached at matthew.flocco@temple.edu.

Pat Gordon says he loves his job. He has been working at Temple since before he was a student, and now he’s the guy who helps you take the right classes. He is also a freelance sports writer and is pursuing his Master of Arts in journalism at Temple.

The trouble with advising

Gripes with student advising are not only one-sided. The Temple News examines the university-wide advising system in a two-part series.

The university should make advising more accessible and personalized for students.