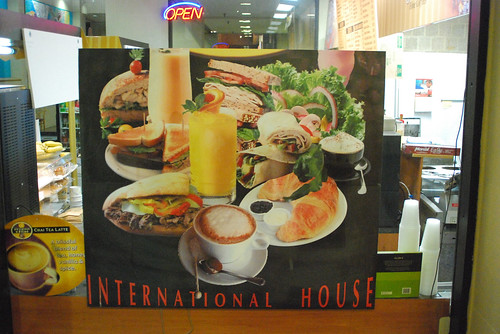 The theater’s patrons sit in the dark as faces of ‘60s-era ghosts are projected on screen. People shift in the cushioned seats with each swell of music, but this is neither an ordinary film nor venue.

The film is one of many produced by Danny Williams in Andy Warhol’s Factory, and the venue is West Philly’s International House, a meeting place for cultured minds and international and American students.

Inside, grungy, 16mm black-and-white film is juxtaposed with in-house experimental strings. With each crescendo and action, the result is apparent. The screening is more than a screening – it leaves patrons with the feeling of experiencing a unique, singular event, the feeling of live theater.

Created nearly 100 years ago, the International House was established as a residence for international students studying in Philadelphia. The non-profit organization’s goal has been to promote mutual understanding and respect among scholars from all corners of the world.

The house became known as an arts venue in the late ‘70s and early ‘80s, when it served as an outlet for the Folk Life Center and the Neighborhood Film and Video Project. Gradually, through the decades, the residence has developed into a center for culture as well.
“Several folks in the community who were working with artists [had been] looking to create a sort of artists’ space for both music and for film and decided to use [the International House] as a place to screen films and to also host other sort of cultural events,” program director Jesse Pirez said.

In keeping with the house’s mission, the arts program aims to have a multinational focus. Pirez and the other curators look to showcase the zeitgeists of different regions.

“We’ve decided to make our programming more reflective of a kind of global perspective without trivializing cultures,” Pirez said. “We wanted to make a concerted effort to move away from a more old-fashioned model of presenting cultures and have it be a more dynamic, more contemporary and certainly more engaging and challenging experience.”

Program curator and projectionist Robert Cargni said the International House is defined by its unique outlook on art and culture.
“You have to understand that less than 3 percent of the world’s cinema makes it into the United States subtitled. The reason why it’s such a low percent is that kind of cinema cannot find commercial venue in the United States,” Cargni said. “Let’s face it, Americans like American cinema. What makes International House special is that it is not commercially driven. We program in such a manner that exhibits the best possible examinations of whatever genre you want or whatever thematic context you want to talk about.”

Pirez and Cargni were both once audience members themselves, seeking out and appreciating both classical and world cinema.

“Myself, I went to Temple . . . and when I was taking film classes, I saw a poster for some screenings here and discovered this place,” Pirez said. “So I was an audience member, and eventually was a work study person, and was hired here shortly after graduation.”
The house has been host to a number of festivals familiar to the Philly film aficionado and holds bragging rights as the birthplace of the Philadelphia Film Festival. As both men were ready to admit, however, the city’s film community currently leaves a little something to be desired.

“I don’t think there’s really a cohesive film culture in Philadelphia. But there’s certainly framework, a possibility, of having a more vibrant film culture,” Pirez said.

While the International House may not currently have a huge audience, attendees and contributing members have come to know and appreciate what it offers. In the many events planned for the future, ranging from narrative to installation film and from visual animation to experimental music, the house will continue to broaden the spectrum often hindered by more mainstream culture.
And if Philadelphia’s film community truly reaches its potential, the International House may be at the heart of that movement.

Luke Marron can be reached at luke.marron@temple.edu.