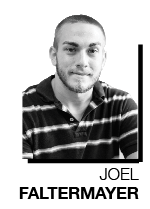 While many oppose  Councilman Darrell Clarke’s proposed housing bill, Faltermayer argues this type of legislative is needed to hold Temple   responsible and accountable for its housing policies.

It seems as if every few months or so, this tired debate over Temple’s feudal policies of expansion is given new life in lieu of yet another shooting, mugging or student-debauchery run amuck.

Opinions are collected from both sides of the fence and haphazardly molded into a representation of North Philadelphia’s changing demographic, while Temple releases rhetorically-promising public relations blueprints in order to put off making any tangible moves toward reconciliation. In the meantime, Saturday nights continue as usual, with 40-toting swarms of students basking in the dilapidation of the neighborhoods that remain impoverished.

Though I see that students, residents and developers alike have been effectively represented in this debate, there is no question that each is merely voicing their own logical interests. However, demonizing other parties simply covers up the true agent of gentrification: the university. While there is no chance that this new ordinance proposed by City Councilman Darrell Clarke will be put in place, it should provide a mirror to Temple’s administration so that they can begin to clean up their own mess.

For the record, I am absolutely behind any legislation that humbles a fiscally irresponsible institution such as Temple. The university’s refusal to contribute anything tangible to the debate is completely consistent with its own interests. The Good Neighbor Policy is simply a Band-Aid slapped on a gaping wound, which shows how little thought the university has put into residential housing.

Frankly, Temple’s lack of credibility in neighborhood matters should void any attempted response to the matter. What all concerned fail to realize is that Temple will continue to generate income from a changing demographic, regardless of students’ residential decisions. For the majority of students who remain content with the novelty of going to class in pajamas, yet economically or wantonly wish to move out of Temple’s dorms, the private development surrounding Temple offers the only solution.

Everyone knows Temple’s history as the blue-collar backbone of Philadelphia’s academic network. Like the best parts of this city, Temple has remained a unique “Harvard on the Delaware,” without the pretense of false antiquity, alienating class or high tuition. But in the 21st century, the university lost all credibility by utilizing corporate hiring policies and constructing a poor façade of residential, four year education. And to lose dignity of this magnitude in a city that snowballed Santa Claus can prove to be very disruptive to Philadelphia’s economic and social structure.

In a pursuit to transform Main Campus into a residential nest of student activity, Temple utterly failed to accommodate students who had barely left their parents’ house a year prior.

Now, because of this most recent legislative discourse, which plans to “prohibit students from living in areas near Main Campus,” we have the opportunity to gauge Temple’s response to its own expansion and rethink the direction that this will take us. The source of the issue lies not with sloppy, underage inebriation, fiscally-minded private developers or with a few communities struggling to unify in the shadow of the university wrecking ball. The source remains the institution who can’t manage its own identity in the 21st century. Clearly, if this school was once an “Acre of Diamonds,” it has failed to uphold moral integrity in an attempt to save face.

Darrell Clarke’s bill proposal doesn’t have enough supportive evidence for his strong claims against Temple students. Councilman Darrell Clarke’s weak proposal to ban student-housing near Temple demonstrates another of his unfounded claims and sends an