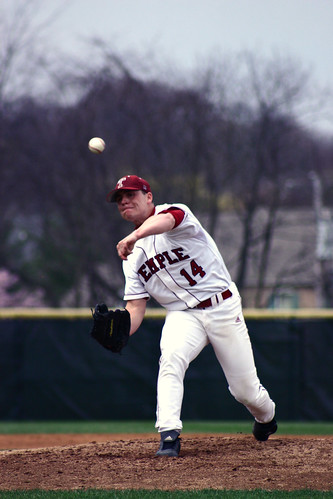 Although the baseball team is currently tied for third place in the Atlantic Ten Conference standings, they were on the losing end of an embarrassing defeat this weekend.

The Owls (16-16, 8-4 A-10) suffered a tumultuous 23-0 loss to visiting Richmond Friday at Skip Wilson Field in Ambler. The squad, which won two of five games last week, committed a season-high six errors and produced only six hits, the second fewest this season. The Spiders’ 23 runs came on 21 hits — 10 of which went for extra bases — at the expense of five Owls’ pitchers.

Despite the loss, the Owls still won the three-game series, notching a 6-2 victory on Saturday and an 11-1 decision Sunday.

“Matt pitched great,” coach Rob Valli told Owlsports.com, the Temple Athletics Web site. “We challenged him to give us a great outing and he gave us just that.”

The next day, it was Matt’s older brother, senior Mike Mongiardini, who took the hill for the Owls and led them to a victory.
Mike Mongiardini (2-2) threw 5 1/3 scoreless innings, allowing just three hits. He got to pitch with a lead thanks to the Owls’ three runs on five hits in the first inning.

Earlier in the week, the Owls lost to No. 22 Saint John’s, 3-2. That marked the fourth straight game against a ranked opponent, as they dropped two of three to then-No. 18 Charlotte prior to the St. John’s game.

Freshman pitcher Steve Nikorak made his collegiate debut against the Red Storm. He went seven innings in the defeat.

“You lose a 3-2 game to one of the top teams in the country, I don’t think there’s any shame in that,” Valli said to Owlsports.com. “Every time we go out there, we go out to win. But today, we were probably one play away from winning the game.”

In their only road game last week, the Owls lost to Towson, 9-5, Wednesday.

After an off day yesterday, the Owls will return to the diamond this afternoon against Delaware at 3 p.m. From there, the next eight games will be played from the confines of Skip Wilson Field. The Owls are in the midst of a 12-game home stretch.

The Owls are 6-8 at home this season. Eighteen of the Owls’ 20 games in April are scheduled to be played at home.

Floyd W. Alston will be the featured speaker at the university-wide commencement ceremony at the Liacouras Center on May 22. Alston, a local business leader, will also receive an honorary doctor of humane letters degree

What began as Ted Turner’s presentation on sustainability in the restaurant business quickly became a fierce criticism of the media mogul’s business practices and personal ideas last Tuesday.In 2002, the chairman of Turner Enterprises, Inc.

Temple hosted the annual Pennsylvania College Democrats convention for the first time last weekend. The convention brought together 105 delegates from 15 colleges and universities throughout the state. Visiting students were lodged at the Holiday