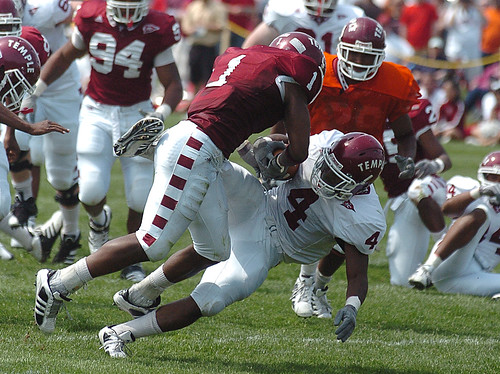 AMBLER — As the sun blazed down on a choppy field at the Sports Complex, the football team split into two and went to work.

Thanks to two third-quarter touchdowns, the Cherry squad rebounded from a sloppy first half to defeat the White team, 21-6, Saturday afternoon in the Owls annual spring intra-squad game.

Junior quarterback Vaughn Charlton led the way for the Cherry squad with 209 passing yards, throwing two touchdowns and running for another. Senior linebacker Wallace Bates added eight tackles and three sacks to headline the day for the Cherry defense.

After a sloppy first half that featured a plethora of blocked kicks, bad snaps, dropped passes and fumbled exchanges, Charlton connected with senior wide receiver Bruce Francis for a 75-yard touchdown pass at the 5:24 mark of the third quarter. That, combined with a one-yard touchdown run by Charlton later in the quarter, sealed the win for the Cherry squad.

But despite the careless play and a number of miscues, coach Al Golden was not discouraged. Instead, he used the scrimmage to see who on his team was ready to perform in an actual game and not just in practice.

“We’ve just got a lot of guys right now that we’re trying to force into roles,” the Owls’ third-year coach said. “I told the guys all week, ‘That’s what this game is all about. Who can perform when the lights go on?”

The White team, meanwhile, was pegged to be led by red-shirt freshman quarterback Chester Stewart, but he sprained his thumb on the first play from scrimmage and missed the rest of the first half.

The 6-foot-3 Stewart did return to action in the second half, throwing for 123 yards and one interception. His performance impressed redshirt senior quarterback Adam DiMichele, who, although suited up in pads, was relegated to the sidelines because of a broken leg injury suffered last season.

“I was glad he got some time because that first snap he kind of hurt his hand,” DiMichele said. “When he came back in, he made some plays. He’s just got to think through his progressions a little more, but I’ve been impressed with Chester throughout the whole entire spring.”

However, Stewart was not all that high on himself.

“I think I did OK,” he said. “I made some mistakes though but my athleticism bailed me out a few times, but I made a lot of mistakes that should’ve been bigger plays then they were.”

The Owls’ kicking game also made its share of mistakes, as both squads combined to yield a kickoff out of bounds, a blocked extra point returned for a two-point conversion, a blocked field goal, a missed field goal and a missed extra point.
Yet, when asked if he was frustrated with that kind of a performance, Golden didn’t skip a beat.

“No, that’s not frustrating,” he said. “To me, it’s more important that the guys know how to handle the situation, know how to make the substitutions, get on and off the field, know how to communicate, get the call [and] run the play.”

The Owls’ first game of the 2008 season is a little more than four months away, as they will take on Army August 29 in West Point, N.Y.

Northeastern University was the previous leader in the area with 417 registered donors. The Owls will learn how they finished nationally this week.

The defense stole the show at Cherry and White Day, as only the White team found the endzone in the Owls’ annual spring practice game. Andre Neblett led the defensive charge.

Police Commissioner Charles Ramsey took the floor at a University of Pennsylvania class Thursday afternoon and addressed a room packed with students about the media’s role in public safety. After a five-minute introduction of himself

Michael Mathis wasn’t satisfied with the career options available to him after receiving his high school diploma. “I was the manager at Foot Action, selling shoes like Al Bundy,” he said. When the store closed