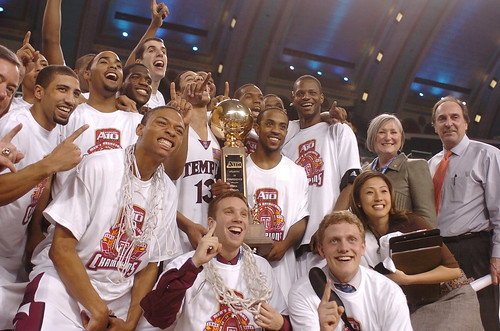 He’s been coaching for 19 years. He can now add six more.

Temple announced that Fran Dunphy has extended his contract through the 2013-14 season, meaning he won’t be leaving the Owls any time soon. Director of Athletics Bill Bradshaw announced the news today.

“We knew when we hired Fran Dunphy two years ago that he was the right man to lead Temple basketball,” Bradshaw said.

Dunphy, who was hired two years ago to replace longtime coach John Chaney, led the men’s basketball team to the top of the Atlantic 10 Conference. Shortly after, he brought the Owls back to the national spotlight with an appearance in the NCAA Tournament this year. The No. 12-seeded Owls were eliminated in the first round.

“We could not have a better person, nor a better coach, at the helm,” Bradshaw said.

Dunphy has a career record of 343-194 and was recently named the 2008 Eastern College Coach of the Year.

Here’s your method for some A-10 Madness

Some have the luxury of an automatic bid into the NCAA Tournament – a free pass into the Holy Grail of college basketball.

Redshirt-senior guard Josh Brown played a team-high 32 minutes in Temple’s, 70-60, victory against Jefferson University on Thursday at the Liacouras Center.