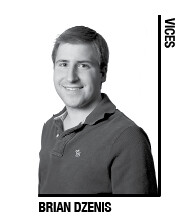 “Vices” is a column that challenges what we think we need. For each segment, a different writer will give up something he or she “can’t live without.” We watch them land safely or crash and burn. This week, the Editor-in-Chief of The Temple News gave up meat for one month.

Hi, my name is Brian, and I like bacon.

Seriously, my affection for bacon, chicken, beef and all other kinds of meats is well-documented. The second sentence of my Twitter profile states: “I like sports, bacon and foods that include bacon.” Following a discussion about how awesome Five Guys is, former managing editor of The Temple News and vegetarian Ashley Nguyen said to me: “You and fatty acids are like Bert and Ernie.”

So for my foray into “Vices” I elected to give up meat. But as the friendly overlord of The Temple News, I couldn’t just go one week without meat–I did one whole month. To clarify, I went a month without meat, not animal products entirely. Eggs and dairy were still allowed. I couldn’t go vegan–that’s for Communists.

I remember my last piece of meat consumed was spicy beef jerky from Reading Terminal Market on Sept. 30 at 10 p.m. After that, I stepped into the unknown.

At first, the adjustment to meatless life seemed simple: Just take the meat part out of your normal diet. My breakfasts, which usually consist of handfuls of cereal or lightly-zapped Pop Tarts shoved in my face, are typically meatless in their nature, so no big adjustment there.

For lunch or dinner, I would just eat my normal foods, sans meat. This week I consumed more variations of meatless pizza than I am proud to admit and from Saturday through Monday I was OK. Tuesday, I started getting a little gassy and I diagnosed myself with a light case of meat withdrawal. By Wednesday, I was dying. I was perpetually hungry and had headaches despite eating what I considered to be actual meals. It was apparent that I was doing this meatless thing wrong.

I do not recall everything I ate, but I do know it consisted of some combination of bread, potatoes, cheese or some processed foods, none of which provided protein. Fun fact: When not eating meat, you can get protein via nuts, peanut butter, beans and Greek yogurt. With this knowledge in hand, I made a new friend: Jif the peanut butter jar. Jif and I are BFF’s. He made the headaches and hunger go away. He makes fine peanut butter and jelly sandwiches, goes on crackers and goes great with bread and sliced bananas.

So I survived week one with Jif picking up the protein slack, but I can’t say I was enjoying myself. I was getting sick of just plain or white pizza and Jif is awesome, but he can only do so much. I needed to reinvent my bold-flavor lifestyle sans meat and to do that, I needed to explore new foods.

Peanut butter is cool, but it was time to step outside my comfort zone. I took some baby steps by purchasing some Greek yogurt, which boasts approximately 18 grams of protein, according to the carton.

I found the cartons intimidating.

I also have a mixed history with regular yogurt because I don’t get why there needs to be chunks of fruit in there. Part of my issue is that I wish yogurt was more like pudding. I would like to point out that I have no beef with frozen yogurt, mainly because it tastes like regular ice cream. In any case, I left the cartons in the fridge for a week.

A food that has not been intimidating is black beans. I never had them prior to this experiment, and had my first go with them at Qdoba in a burrito. I don’t know if it’s because I smothered the things in hot sauce, but they’re solid.

Contrary to the children’s nursery rhyme, I found that eating beans did not translate into more farting. That’s good, I guess.

It was painful picking the pepperoni off my microwavable French-bread pizzas. Seeing perfectly good pepperoni go in the trash made me feel more yucky than the prospect of two more meatless weeks.

I really would have liked some buffalo chicken pizza, but I got something even better: Greek yogurt. Yes, I cracked a carton open and what did I find? A yogurt-like mess with a pool of liquid on top. It looked gross. After dumping the liquid in the sink, I mixed the stuff up and took my first few bites. It was way too sweet to the point where it had a bitter taste. I tried grinding up graham crackers and mixing them in, but they couldn’t save Greek yogurt from my thumbs down.

Let’s talk about veggie burgers. All I will say about those is that their quality of taste really depends on where you get them. It’s not like french fries. Places can, and do, screw them up.

As a freshman, I thought I could try being chic and healthy and eat a veggie burger at Johnson and Hardwick cafeteria. It was like eating AstroTurf and I gave that crap up after one bite.

But at places like the Sexy Green Truck, veggie burgers may not entirely replace regular beef patties in terms of deliciousness, but they can be a nice change of pace.

As I neared the finish line, I had this observation: Going vegetarian doesn’t exactly translate into being a healthier eater. I haven’t weighed myself at all during this process, but I don’t think it has made much of a difference. I can pull my belt one loop tighter from where I started, so that’s nice, I guess.

My point is, I had enough opportunity to be a little fat boy on campus even without meat. For example, there’s my favorite lunch truck, the crepe tuck. My go-to crepe used to be the southwest rib crepe, but for my meatless month, I only learned I was scratching the surface of the Crepe Truck’s awesomeness. My favorite during this period was the Boston cream crepe with strawberries, blueberries, Boston cream and Nutella. It has fruit to make you feel like you’re eating healthier, but the cream and Nutella offsets that.

Just after midnight on Nov. 1, I ate a slice of buffalo, ranch and bacon pizza. There are no words to describe the experience of eating bacon after a month. I’ll put it like that.

Since I’ve been reintegrating myself into the world of meat, I’ve been having thoughts like, “Have you ever thought about how good bacon is? I mean really thought about it?” I have.

In conclusion, while going a month without meat was doable, I wouldn’t recommend it. I think I’ll stick with Team Bacon.

In the final edition of “Vices,” Alexis Sachdev calls it quits on her nicotine love affair.
“Vices” is a four-part column that challenges what we think we need. Each week, a different writer will give up something he or she “can’t live without.” We watch them land safely or crash and burn.

“Vices” is a series that challenges what we think we need. Each week, a different writer will give up something he or she “can’t live without.” We watch them land safely or crash and burn.