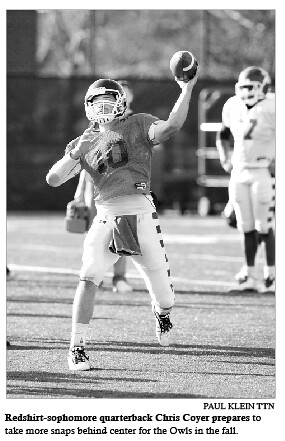 For the Temple offense this upcoming season, the name of the game will be diversity.

As the Owls transition into their second season under coach Steve Addazio, his spread offense philosophy will become heavily implemented in the 2012 season.

“We didn’t really get into [the offense] that far last season, and in terms of the spread option component, which we’ll be way beyond that now,” Addazio said. “We want to have the most diverse offense that we can have.”

This past February, Ryan Day rejoined the Owls’ coaching staff as the new offensive coordinator. Day previously coached the wide receivers during the 2006 season.

The former quarterback at New Hampshire University (1997-2001), who recently was the wide receivers coach at Boston College for five seasons, brings added experience and knowledge to the spread offense system.

Before coaching at Boston College, Day coached at Florida in 2005 as offensive graduate assistant alongside coach Urban Meyer and Addazio, who was the offensive coordinator.

Day said that for this upcoming season, the offense is going to be multi-dimensional.

“What we’re going to try to do is find the best way to get our best players in a situation to be successful, however that might be on a weekly basis,” Day said.

That means a move away from what Temple fans are used to seeing: a heavy dose of run plays, with a play-action pass mixed in every now and then.

With redshirt-sophomore quarterback Chris Coyer manning the offense for his second year, the offense will be more balanced, Addazio said.

“We’re going to put more on [Coyer],” Addazio said. “Now we’re going to be more wide open and more flexible in terms of spreading the field.”

As the Owls look to spread the field, Day said there isn’t one main target through the air.

Although junior running back Matt Brown will be leading the offense, both Addazio and Day agree on the philosophy of spreading the ball.

As Florida’s assistant head coach in their national championship campaign during 2008, Addazio’s offense spread the ball. Four players in that offense had more than 600 rushing yards, while three players had more than 30 receptions.

Day said that players such as freshman wide receiver Jalen Fitzpatrick are growing into the wide receiver-running back hybrid that the spread offense creates.

As the Owls look to spread the field more for this upcoming season, the team will mix the old with the new.

“[Fans] will still see closed formations and remnants of a year ago, that’s not going to leave us,” Addazio said. “But [fans] will also see new additions here.”

So with a year of experience in the spread offense and a new offensive coordinator on staff, Temple’s offense is growing into its own.

Coach Al Golden is a former Penn State Nittany Lion. He was also a co-captain on PSU coach Joe Paterno’s Fiesta Bowl-winning 1991 squad. On Saturday, he’ll be his alma mater’s adversary. Fresh off its

Despite leading at halftime, the football team fell to UCLA, 30-21, at the EagleBank Bowl Tuesday. The Owls, who lost freshman running back Bernard Pierce to a left shoulder injury in the second quarter, gave up 23 unanswered points.