Constantine “Chris” Pavlides will be memorialized at the Fox School through a mentorship program or scholarship fund.

On the morning of Nov. 17, Fox School of Business professor Constantine “Chris” Pavlides died in a car accident on Conchester Highway in Delaware County after losing control of his vehicle. Two weeks later, many Temple students, faculty and alumni are still feeling the shock and trying to figure out what comes next. 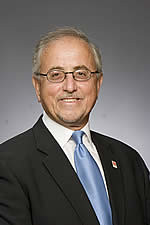 “Chris was really unusual,” she said. “He delighted in helping people connect and find the right fit.”

Wilcox said she knew firsthand about Pavlides’ passion and talent for connecting people. She first met him at a meeting of the Greater Philadelphia Senior Executive Group, Inc., a networking group he founded for out-of-work executives in the Philadelphia region.

In addition to working with GPSEG and being an associate professor of entrepreneurship at Fox, Pavlides was a driving force behind the creation of the Innovation and Entrepreneurship Institute.

According to the IEI’s web site, the organization “proactively promotes the entrepreneurial spirit through all 17 schools and colleges of [Temple].”

Pavlides served as executive director of the IEI since its inception. It was his direction that led to the institute being ranked in the top 10 for most comprehensive entrepreneurship program in the nation in October by the Princeton Review and Entrepreneur magazine.

Like Wilcox, Yasmine Mustafa, a graduate of the Fox School, knew Pavlides in several capacities. She first met him as her adviser and mentor at the Entrepreneurial Students Association, where she said he was a great help in developing ideas.

“I would get an idea and go get his thoughts, and he always had an interesting way of getting me to figure out the potential problems with an idea instead of just telling me what he thought was wrong.”

“He never told you an idea was bad, and if you were trying to achieve something, 75 percent of the time he had a connection that could help you. He was very selfless even though he was so busy,” she said.
Wilcox and Mustafa both said working with Pavlides changed their lives.

Wilcox said she began speaking with Pavlides at a GPSEG meeting years ago about an idea for a college class on entrepreneurial marketing. Now, not only is she teaching the class, she’s a full-time faculty member at Temple.

“It’s a dream,” she said, that couldn’t have become reality without Pavlides.

Mustafa has a similar story. When she was in school and couldn’t intern at the small tech startup she wanted to, Pavlides bent the rules to allow her to follow her passion. Today she has a similar company of her own, an online software startup soon to be launched, called, “123LinkIt.com.” The site will provide a free tool to help bloggers attract advertisers and increase their revenues.

While Pavlides’ spirit continues on in the efforts of those he touched during his life, many within the Temple community are at a loss. Because his passing left so many people – to whom Pavlides was such a force in their lives, they say – in such a state of shock, Mustafa said she created a Facebook group dedicated to his memory.

The group, “In Remembrance of Chris Pavlides,” has more than 100 members and is still growing. Its wall is filled with comments from people who say the professor changed their lives. They all have similar sounding tributes. Many called him a friend, a mentor or a visionary.

With the funeral over and most press coverage in the past, friends and colleagues of Pavlides said they are looking for a way to enshrine his memory in physical form at Temple.

Wilcox described the drive among those who knew him to find a memorial.

“We’re very passionate,” she said. “We really feel it’s important that something is put in place to honor him.”

A couple of the options currently in consideration to memorialize Pavlides include a mentorship program and scholarship fund. Whatever form it takes, Mustafa said Pavlides’ memorial should continue to carry out the work to which he dedicated his life.

Michael Polinsky can be reached at michael.polinsky@temple.edu.

In memory of a business professor who died in a car crash last month, students held a fundraiser to raise money for a namesake scholarship.