Decades removed from a Billboard Magazine cover and an American Bandstand appearance, the American Studies professor is grateful for her time spent in the music biz. Her time is now spent sharing lessons and experiences with her students.

Rhodes started playing in bands when she was 12. The Texas-born singer received her doctorate in philosophy from the University of Texas at Austin and eventually began to sing and play guitar in her new wave/rock band.

Rhodes, who has been teaching since 1993, said her music career prepared her as a professor.

“Struggling and not having money at times prepared me for grad school, and I’d say performing in front of thousands of people helped me prepare for standing up in front of people teaching,” Rhodes said.

Rhodes said she doesn’t dwell on what she could’ve been and is far from bitter about leaving her life in the music industry behind.

“Rock ‘n’ roll is a young person’s game,” she said. “When I was done, at the end of my 20s, I was tired of traveling, and I wanted to do more studying. So I went to grad school, got started on my dissertation and eventually made my way to teaching.”

Ending a music career before 30 may seem like an abrupt finish, but Rhodes has plenty of experiences to fill her musical résumé.

“There were times when we didn’t have enough money, when we performed in clubs that were dumps, when it was hard to keep all the musicians in line, when we didn’t get paid,” she said. “Being a musician is like a vacation. But just like any vacation, it can go wrong.”

As for the good times, Rhodes said she’s had plenty of those, too.

“I toured the Midwest, New Orleans, played the Roxy in Los Angeles – all over,” she said. “We opened up for artists like Joan Jett and the Neville Brothers. It was fun.”

Rhodes said she is particularly proud of a song she wrote that was recorded by the Neville Brothers and her appearance on American Bandstand.

“One of my songs was on the show for this segment called ‘Rate-A-Record.’ They played my song, people danced to it, and then, they rated it.”

Rhodes got a decent rating but lost when the Fine Young Cannibals earned a higher score.

“It was still fun to hear Dick Clark say my name, though. And my mom was excited,” she said.

As for the part of Rhodes’ rock ‘n’ roll life that nobody knows about: “Oh yeah,” she said. “I’ve got those stories too, but none of them I’d print.”

Despite the untold stories of her rock ‘n’ roll past, Rhodes seems to have made a smooth transition from the life of a rock star to a Temple professor. 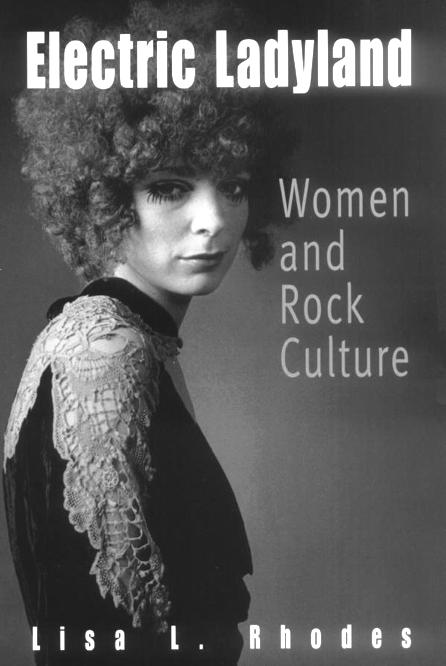 “I get a lot more satisfaction from teaching,” she said. “It’s nice to help people through music, but I feel like I can help more now. Plus, I’m getting to know students. I get to know what they want to learn, and I get to teach them and try to relate my experiences through my teaching. My students can ask me about the music business, and I can give them advice. It’s cool. I like to think the old dog’s still got some tricks.”

When it comes to her professional career, Rhodes has a book to her name –  Electric Ladyland – which is used in classrooms across the country.

“The book is a story of the history of women in rock ‘n’ roll and groupies,” Rhodes said. “It came from my doctoral dissertation, which I believe was called ‘Groupies, Girls and Chicks.’ It’s a good thing the publishing company made me change it,” she said with a laugh. “There’s nothing out there like it.”

Indeed, there are few others out there like Rhodes, shifting from touring musician to respected professor. From the stages and crowds of fans to the classrooms and time spent sitting in an office grading papers, it doesn’t seem to be a life many are cut out for.

Though she’s not making music like she used to, Rhodes hasn’t forgotten how to rock. She sings and plays rhythm guitar in a local band, Lisa R. and the Lucky Stars.

“It’s a few working musicians and even a Temple student from the music school. I just do it for fun, and all the proceeds go to my band.”

Rhodes has other projects to keep her occupied these days, including a novel that’s been accepted for publication and getting back into the studio.

These projects are “just for my own enjoyment,” Rhodes said.

As a reminder of where her life has come and where it once was, Rhodes compares her happiness with how her life has played out.

“I’m happy with where things are now,” she said. “I mean, sure, maybe I’d like to lose some weight or have some more money, but my life is good.”

Gabriel Katz can be reached at gabriel.katz@temple.edu.

Former Mayor Street’s Neighborhood Transformation Initiative could bring Philadelphia to the forefront of urban revitalization if proper steps are taken.

Two Temple faculty members are parting ways with the university after the semester ends.

On a beautiful Saturday afternoon, the Owls put themselves in the driver’s seat for a playoff spot with a 6-4 win over Dayton at the Ambler Sports Complex.