Simple activities like holding your boyfriend’s hand while walking down Liacouras Walk or greeting your girlfriend with a kiss before eating lunch at Johnson & Hardwick are things some Main Campus LGBTQ students only dream about. Junior religion major Zoe Goldberg said she is all too familiar with the feeling. 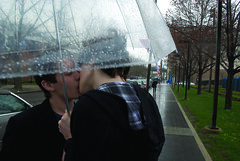 “I see straight couples walking around holding hands every day. But my girlfriend and I have talked about it, and we would never do it. We wouldn’t be comfortable,” Goldberg said.

On April 1, hate-group Westboro Baptist Church is set to invade Main Campus to protest The Laramie Project and Rent productions. The group, which boasts signature phrases such as “God hates fags,” and “God hates fag enablers,” is doing so in order to voice its opposition to the queer-related content in both productions.

But many gay students endure harassment year-round. Many students are harassed for minute circumstances like the way they are dressed or even the way they walk. Senior business major and Temple Student Government Services Review Chair Sean O’Connell said he is one of many students who have been on the receiving end of such treatment.

“A friend and I were walking home, and two students came up close behind us and tried to intimidate us by calling us ‘faggots,’” he said. “They were drunk, so it may not have been something they would say every day, but it still shines a light on how they feel inside about us.”

But whether students choose to express their homophobic feelings, there’s still an origin to those closed-minded ideas. As with most prejudices, there is no one cause to attribute to homophobia. Many use moral and religious convictions as support for their homophobic beliefs, but for sophomore marketing major Molly Jae Levine, that excuse “just doesn’t cut it.”

“People used religion to justify slavery, and we all know that that was wrong,” Levine said. “So when are we going to wake up and realize it’s not a justification for homophobia either?”

Forensic psychologist Karen Franklin published a study on homophobia titled “Inside the Minds of People Who Hate Gays,” in which she states people often become homophobic as a means to reinforce gender norms.

“I came to conceptualize the violence not in terms of individual hatred, but as an extreme expression of American cultural stereotypes and expectations regarding male and female behavior,” Franklin said in her study.

That theory on homophobia is echoed by many LGBTQ students as well, including Goldberg.

“We live in a very heteronormative society, and there are rigid roles for males and females. When someone doesn’t fit perfectly into those norms, they are viewed as wrong,” Goldberg said.

Junior criminal justice major Sarah Milliron said she believes Temple’s diverse student body is both a gift and a curse in this case.

“There are so many different students all interacting with each other,” Milliron said.

“And for a lot of them, coming here might be their first real experience dealing with gay people. I think a lot of it is more ignorance than hatred.”

Campus Pride is the leading national nonprofit organization for student leaders and campus groups who aim to foster an inclusive and welcoming educational experience for LGBTQ people and their allies.

Penn State University and the University of Pennsylvania both received five stars. Temple has not yet participated in the survey.

Goldberg said she thinks Temple should take advantage of this resource because the overwhelming consensus is that there is much improvement to be made in this area. While Temple often prides itself as being a diverse university, members of the LGBTQ community have said they feel their needs are either poorly met or ignored altogether.

Although administrators at Temple can’t erase years of hate-filled ideologies, many students said there are some measures the university can take to show more support for the on-campus LGBTQ community.

One measure mentioned is installing a “safe zone” on campus, a place where LGBTQ students can escape the judgments of people who don’t understand them and feel free to be themselves.

Others suggested support systems on campus for those who are victims of gender- or sexuality-related assault, a dedicated counseling service that caters to students with LGBTQ issues and sensitivity training for all faculty and staff.

“People who identify as trans have to use bathrooms that either do not correspond with their gender, or they face the threat of being physically assaulted,” Hesketh said.
Michael Hanowitz, coordinator of the Sexual Assault, Counseling, and Education program at Tuttleman Counseling Service, said he is disappointed many queer students feel unsupported.

“We, along with HEART work very hard to let LGBTQ students know that we are an ally to them,” Hanowitz said.

Tuttleman Counseling sends representatives to orientation to inform incoming students about all its services, including those catered to queer students.

“In addition to the men’s support and therapy group for gay, bisexual and questioning men that’s been in existence for 10 years, we also have a new therapy group for transgender students that began this year,” Hanowitz said.

Due to what Hanowitz said is a “lack of interest,” Tuttleman Counseling has not been able to maintain a group for gay, bisexual and questioning females, but it is more than willing to establish one if students demonstrate a desire for it.

“All of our therapists are LGBTQ-friendly, and we would never hire someone who wasn’t able to be 100 percent supportive to everyone. No student would have to worry about being discriminated whatsoever. These services are here for the students. They just need to come in and take advantage of them,” Hanowitz said.

But O’Connell said the problem may be visibility.

“Temple has a lot of resources for LGBTQ students, even if they’re not specifically designated for them,” O’Connell said. “Giving LGBTQ students a clear path to those resources, and guidance, is where they’re lacking.”

Angelo Williams can be reached at angelo.williams@temple.edu.

A student is uplifted by Frank Ocean’s status as a prominent artist who is also a bisexual man of color.