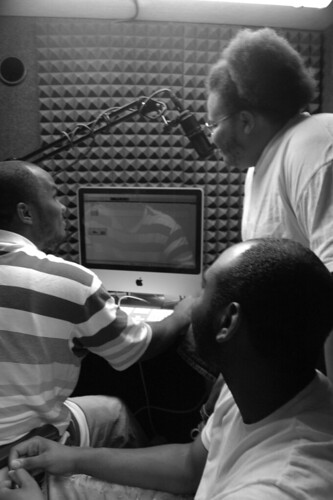 As an attempt to stay on the ever-moving “cusp of technology,” the TECH Center’s newest addition enables students to make recordings of professional quality in soundproof privacy.

The three recording booths are prefabricated, soundproofed rooms located in the Blue Lab, next to the Macintosh computers. As with other TECH Center features, this new amenity is offered completely free of charge with the presentation of an Owl Card.

The idea started with suggestions from students who were looking to do voice recordings for projects and narratives.
“One of the things we found out is that a lot of the students were interested in us just being on the cusp of technology,” said Joseph Williams, technical floor manager at the TECH Center.

The three booths are loaded with a state-of-the-art microphone, Mbox and Macintosh computer, and stocked with all the professional-grade software a person needs for recording.

“You could burn your CD, your DVD, audio files and surround-sound files. Yeah, you can do that all right here,” Williams said. “The software that we have are the professional versions, the same type you’d find in a CD at the store.”

Jerry Hinkle, executive director of the TECH Center, said he is surprised by the variety of students coming to use the booths that officially opened at the start of this semester.

The equipment isn’t difficult to use. However, there is an instruction booklet in each recording booth in case the user needs a little help.

“Once you come here and press a couple of buttons, you’ll pick up what we call a work flow,” Hinkle said.

Hinkle said those interested in using a booth can usually just walk in, surrender their ID and ask to use a booth.

“We’re getting a surprising amount of use, but there’s still usually one available so you can usually just walk up and get in there,” he said. “Although, if you’re planning a couple of hours of production time, I’d recommend you make a reservation in advance.”

The booths cost $15,000 to install. Although one of the booths is already wheelchair accessible, the TECH Center plans to expand the recording booths to provide a better experience for those using them. Hinkle explained that they plan to expand what he referred to as “The Arts Corner,” along with the addition of new computers.

“We are making a change this summer where we are ripping out a whole wall in the corner and adding about 28 new computers to extend the lab,” Hinkle said. “The three recording booths are going in a line with a glass wall in front of them to add a little extra bit of soundproofing.”

Hinkle stressed that absolutely anyone can use the booths at their leisure and that experimenting is one of the main reasons they are there.

“I think most people have assignments,” Hinkle said, “but there’s some people who are aspiring musicians or singers and they can certainly use these rooms too, as long as they make a reservation.”

Implemented earlier this semester, Lynda.com provides various technology tutorials at the fingertips of students, professors and faculty members. Lynda.com arrived on Main Campus and has been welcomed by those who have taken advantage of it.

Although sites like Facebook and Twitter serve as platforms for personal expression, columnists Kathryn López and Maria Zankey say some users of the social networking sites take it too far.

Endorse Free: Many newspapers have endorsed a candidate. We won’t.

On April 17, the Daily Pennsylvanian endorsed Sen. Hillary Clinton in the Democratic presidential race, just days before the first meaningful Pennsylvania presidential primary in recent memory. The University of Pennsylvania student newspaper is one