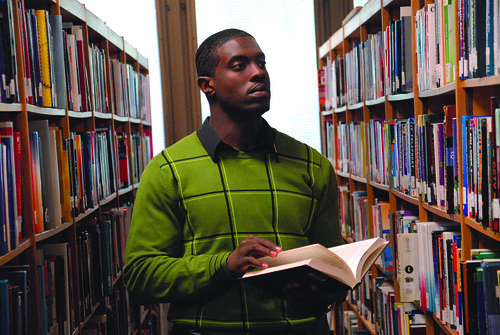 Senior Kendrick Davis will represent the 4,270 graduates at the commencement ceremony on May 14 (Andrew Zwarych/TTN).

Attending Temple was a “last resort” for Kendrick Davis.

“But when I was faced with making a decision after high school graduation, I took a second look at it,” he said.

“I thought, ‘Maybe this is a good place for me. I could fit in. There are opportunities for me to grow and plenty of things to get involved in.”

Davis, a senior mechanical engineering major, took advantage of the opportunities at Temple, prompting a panel to choose him to represent the graduating class as Temple’s student commencement speaker on May 14.

Having one person speak for the 4,270 graduates is no easy task. But Davis is up for the challenge.

“My goal is to take a look at where we are as a nation, as a world and as a university and bring those things together to come up with something optimistic, something that gives a promising tone to the graduates as you sit there wondering, ‘I spent these four or five years here, what is my degree worth?’” he said.

Davis grew up in an inner-city, low-income section of Pittsburgh.

“That’s why it was more important for me to get out and try to expand and broaden my horizons,” he said.

He was valedictorian of his high school graduating class and became interested in Temple because of his brother, Cornell, a 2005 alum.

Though he has pride in his hometown, Davis said it’s not the most ideal place to root yourself or start your career.

“My mom told me this since I was young,” Davis said. “She said, ‘Once you leave here, don’t come back.’”

He has kept busy during his years at Temple. In his freshman year, he was the chairman of the judicial panel in his residence hall. That led to becoming a resident assistant, which he has been doing since his sophomore year.

Last year, he got involved with Phi Sigma Pi, the national honors fraternity, and he was vice president of Temple’s chapter of the National Society of Black Engineers in his senior year.

Going through the process of applying to be commencement speaker allowed Davis the chance to introspect. Being chosen, he said, has been a “humbling experience.”

“[I thought] if I’m chosen, based off my experiences here at Temple, based off my outlook on the Temple community and the potential we have as graduates, that really speaks to maybe I did the right thing, maybe I took the right steps, maybe I influenced the right people,” he said.

“I know what commitment and achievement look like. Kendrick could serve as the prototype,” Ost said. “Beyond his scholarly expertise, Kendrick is a major inspiration around these parts. He models excellence and involvement.”

Dean of Students Ainsley Carry, who helped Davis structure his speech, called Davis “an outstanding student and member of the Temple community.”

“He has separated himself inside and outside the classroom through his commitment to service, academics and leadership,” Carry said.

Davis’ efforts paid off. Last year, he won a Diamond Award, the highest recognition for an undergraduate at Temple.

Through his speech, Davis said he wants the graduates to do some introspection of their own, similar to how he did when preparing the speech.

“Think back to what people you touched, what people touched you, what experiences you had,” he said. “No matter what discipline you’re in, you have the ability to do great things and touch the people around you.”

Davis will start graduate school at Washington University in St. Louis next year, and he said Temple has given him the necessary experiences to transition into the next phase of his life.

“There’s time for you to grow in other places,” Davis said. “Once you’re done in that place, move on to the next. The world’s out there.”

It’s time to separate the hype and paranoia from reality at Temple.

Despite the widespread viral threat, Sarah Sanders refuses to buy into the hype.

Antiretroviral drugs are gaining use as an HIV prevention, but they shouldn’t be used exclusively.