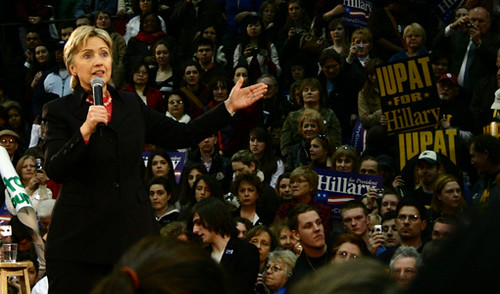 She’s been compared to a monster and Rocky. High-ranking Democrats have called for her to quit the race. And the media have been ruthless in her campaign coverage, including commentary by The Temple News.

It seems that no matter what Sen. Hillary Clinton does, she’s under constant attack by the media. The other presidential candidates don’t have that pleasure.

For example, MSNBC’s David Shuster said in February that former First Daughter Chelsea Clinton was “being pimped out” by her mother. Yet no one says anything about Sen. John McCain’s traveling, blogging daughter.

Another incident occurred when President Bill Clinton recently tried to defend his wife’s misspoken words about Bosnia, saying she was tired at 11 p.m. one night and was under a lot of pressure when she gave the speech.

The media filled with glee. I remember watching the local news that night, as the anchor speculated about the contradiction between the president’s statement and the infamous “3 a.m.” Clinton commercial.

The anchor said, and I paraphrase, “Some wonder if Hillary Clinton can answer the phone at 3 a.m. if she can’t even speak clearly at 11 p.m.”

Such unfair, presumptive attacks on the senator seem like attempts by local and national media to slant their coverage toward Sen. Barack Obama. That is, until ABC’s nationally televised debate last Wednesday.

Moderators and ABC journalists Charles Gibson and George Stephanopoulos have been heavily criticized for their handling the debate. Many say they spent too much time on rumor control rather than hard issues and agree that the debate was slanted to Clinton’s favor.

ABC helped to give journalists – broadcast journalists, in particular – a credibility battle. First, Stephanopoulos was a staffer under President Clinton, which, to me, presents a clear conflict of interest.

It wasn’t until halfway through the debate that “real” questions began to get answered – questions on taxes and the economy, the war in Iraq. Questions that truly matter to millions of Americans.

ABC had a chance to shine with their exclusive debate, yet floundered by asking questions about not wearing U.S. flag pins or associating with an outspoken pastor.

If this was ABC’s attempt to give Clinton a larger lead in Pennsylvania’s primary polls, it nearly failed. If they tried forcefully to depict Clinton as the Rocky underdog, it could have turned voters off.

But thankfully for the democratic process, Pennsylvanians responded while ignoring the polls. Despite media reports of Obama closing the gap within percentage points, Clinton won by about 10 percent of the votes.

As journalists, it is our responsibility to find the truth. We present the objective facts and avoid speculation. It is a journalist’s duty to report all facts from all views so the audience can make its own speculations and decisions – despite personal beliefs of the New York senator.

But they aren’t the ones suffering here. We are.

Submitted by Michael N. Price With the Pennsylvania primary quickly approaching, both Democratic candidates are doing their best to avoid a disastrous political slip-up that could cost them the all-important April 22 vote. Both Sens.

Editor: We, the student government leaders of colleges in the Philadelphia region, endorse Sen. Barack Obama as the candidate of our choice for the Democratic candidate for U.S. president. Firstly, we must note that we

For the first time in 30 years, Temple is changing their grading system. Starting this semester, Temple professors will submit their grades electronically, eliminating paper forms. This is the first time since the 1970s that