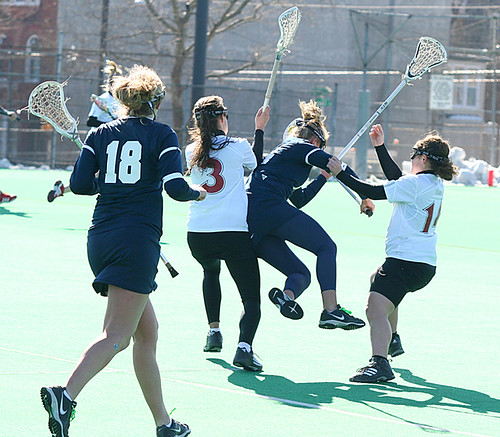 The women’s lacrosse team started the 2008 season on a high note by upsetting No. 14 Penn State, 8-7, at Geasey Field Sunday afternoon.

It was the first time the Owls knocked off a Top 25 team since 2005, when they defeated No. 19 Duquesne on the road in April 2005.
Senior co-captain Nicole Caniglia led the Owls with two goals and an assist, but coach Bonnie Rosen said a strong defensive effort helped Temple obtain the victory. Penn State out-shot Temple, 24-17, but couldn’t get the ball in the net when it mattered most.
“Our defensive teamwork was the key,” Rosen said. “Keeping them to such few goals is unheard of in the women’s game.”

Penn State entered the game ranked No. 14 by the Intercollegiate Women’s Lacrosse Coaches Association, No. 15 by Lacrosse Magazine and tied for 11th by Inside Lacrosse Magazine. The Owls were picked to finish third in the Atlantic Ten Conference this season.

“We never pay attention to pre-season polls its all about what you do [during the season],” Rosen said.

Temple did what was necessary to establish control of the contest early on. The Owls had control of the game until Penn State junior Mariel Bryan scored two goals within the last minute cut Temple lead to 8-7. The Nittany Lions won the ensuing draw and rushed to the net with 20 seconds left but an offensive foul allowed the Owls to keep the game from going into overtime.

The Lions finished the physical game with three yellow cards, a red card and 18 turnovers. The turnovers were huge in helping the Owls prevail.

“It’s great having our first game of the season against them [Penn State], we learn a lot,” Caniglia said.

“[This win] sets our team out on the right foot and gives our team an extra confidence boost,” senior co-captain Hillary Richards said. “A lot of people [played] today who didn’t get a lot of playing time last year, which is great.”

Led by Caniglia, Richards and fellow seniors Lindsey Wells, Berkley Summerlain, Whitney Richards and Hillary Richards, the Owls have experienced players across the board.

Coach Rosen said, “This is a team that knew they needed to come out and play the game and knew it was going to take a team effort great senior leadership.”

The Owls’ senior-filled roster will hit the road for their next game against California on March 6.