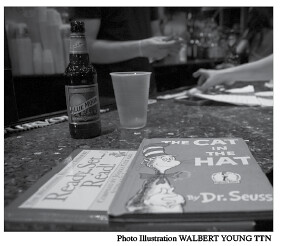 The Bar Hours for Education bill, if passed, would raise extra funds for the city’s schools by allowing bars to stay open an hour later, until 3:00 a.m.

More money for education is an idea any bar fly could drink to.

But raising that money through the Bar Hours for Education Bill, which proposes pushing last call back from 2 a.m. to 3 a.m., has left community members and city officials divided about the idea.

Beyond the logistics of the extended hours, the bill’s author, Councilwoman Blondell Reynolds Brown, said something needs to be done about city school’s financial woes, and this is one way of taking a look at a new solution with what she calls “nonconventional innovative revenue streams.”

“Every year, in the last many years I’ve been there at the end of the school district’s budget hearings, we are hungry, thirsty and looking for additional revenues for the school district,” Brown said. “I’ve had complaints that taxpayers quite frankly are tired of [the city] always coming back to ask them to give additional dollars from their pocket, so I thought it wise and prudent to look for nontraditional revenue streams to do this.”

Since its late-January introduction, the bill has garnered varying opinions. In order for it to go into effect it will need approval by city council, Mayor Michael Nutter and the general assembly in Harrisburg. The bill wouldn’t be the first tax on bars to raise money for books and buses – the city’s liquor-by-the-drink tax raised $42 million last year, Brown said, and this bill would yield a projected $5 million. Bar hours have been extended in other cities including Seattle, New York City, Miami and Washington, D.C.

Despite the added funds, many, including Brown, are not optimistic about the bill’s chances of passing. She said the police commissioner and the chamber of commerce are not in favor.

The extra hour and its chances of producing substantial revenue pose questions on either side of the argument.

It’s possible, and asserted by the bill’s nay-sayers that the extra hour wouldn’t actually generate the projected extra revenue, but its proponents can argue that an extra hour wouldn’t entice significant increases in crime either – a widely voiced concern that Brown called “very legitimate,” adding that the “timing may not be right” for the bill.

“I’m not optimistic this bill will pass because our city is ridden with crime, and not conducive to successfully passing this type of measure,” Brown said.

She added that she hopes to soon see hard data regarding crime patterns around bars, rather than relying on anecdotal evidence.

In areas of the city like Northern Liberties, where recent growth has developed a burgeoning nightlife, the bill raises this question of disruptions to the fabric of the neighborhood.

Matt Ruben, president of the Northern Liberties Neighbors Association, has vocalized this and other concerns publicly since the bill was announced.

“Whole communities have grown up around this idea that in Pennsylvania liquor establishments are only open until 2 a.m., and it’s dangerous to mess with them when it comes to something as nuisance-oriented as this could be,” Ruben said.

Ruben said an extra hour of drinking means drunker people, noise pollution, petty crime and more vulnerable people falling victim to crime when they’re “drunk, walking back to cars in the middle of the night.” Additionally, there’s the cost of bolstering police forces and patrols during the extra hour. He cited Old City as an example.

“There’s a huge number of people from the region who don’t live here and have only experienced Second Street in Northern Liberties,” Ruben said. “So they know the neighborhood as one thing which is a nighttime spot. But we have this whole neighborhood to the west and a little to the east that is a much different place with cafes, other stores and people raising families.”

While Ruben said he doesn’t think the bill will gain much traction, he added that the it was an “interesting idea,” but would rather see old promises, like the Philadelphia Parking Authority’s unfulfilled $25 million 2005 pledge to the school district, delivered on.

“We’re not going to see that money because it’s going to be eaten up by police and by the cost of degrading people’s quality of life,” Ruben said. “As annoying as it is to get a parking ticket, that doesn’t degrade the quality of a community in the same way [that the bill will].”

In light of the course the bar hours bill seems to be taking, Brown has introduced another concept to continue the dialogue around the issue of school funding. Another thoroughly contested bill would place ads on school buses – a practice that was recently approved in New Jersey and, according to Brown was introduced in the mid-’90s. With restrictions preventing alcohol-related, sexual and political content, Brown said she’s much more optimistic about the advertisement bill passing.

“I’m looking for and listening to new measures that I’ve learned about or read about for other states,” Brown said. “Advertising on school buses does no harm and raises money in a nontraditional way providing new revenues for the school district.”

In light of the possibility of neither bills passing, Brown has certainly opened up a discussion around how far Philadelphia should go to close its budget gap.

“This means we have to continue to look at other areas and other opportunities,” Brown said.

Columnist Meghan White offers a low-maintenance alternative to keeping indoor house plants. After four years of living in a city, I am starting to feel the effects of the lack of greenery. I’ve tried to

letters to the editor

19 March 2012 The Temple News Letters to the Editor, Opinion

Dear Editor, In Erik Jacob’s letter that ran in The Temple News’ March 13 issue, he failed to address the issue fairly, despite his stated purpose being just that. As conservatives have been doing since

The Owls lost in the second round to the South Florida Bulls. NASHVILLE, Tenn. – For guards, redshirt-senior Ramone Moore and Juan Fernandez, and graduate center Micheal Eric, the team’s early exit in the NCAA