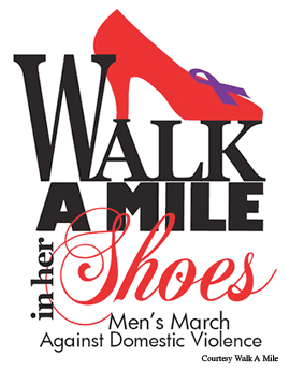 Walk a Mile in Her Shoes, a national event for men to walk in heels to end sexual violence, will take place on Main Campus on March 22.

On average, there are 207,754 victims of rape and sexual assault each year in the U.S. This translates to approximately one victim every two minutes.

While the instances of rape and sexual assault have generally been on the decline since the early 2000s, it still remains an issue in the U.S., especially in regards to women’s equality. Nearly one in six women are sexually assaulted in the U.S. each year, most of whom are 18 to 24 years old, according to the U.S. Department of Justice.

In response to the prevalence of sexual violence in the U.S., Frank Baird created what is now the national movement, Walk a Mile in Her Shoes, the International Men’s March to Stop Rape, Sexual Assault and Gender Violence, in 2001.

Walk a Mile in Her Shoes gathers men in communities around the nation and world to walk for one mile in high-heeled shoes to protest sexual violence against women and to raise funds for rape crisis centers and domestic violence shelters, according to the organization’s website.

Several groups and departments in the university have collaborated to host a Walk a Mile in Her Shoes event on Main Campus on Thursday, March 22 at 11 a.m.

There were 19 instances of reported forcible rape on Main Campus and in non-campus, public area and on-campus student housing areas between 2008 and 2010, according to Campus Safety Services.

Kate Schaffer, program coordinator for alcohol and other drugs, interpersonal violence and mental health in the Health Education and Awareness Resource Team, and Kim Chestnut, the director of HEART, have been instrumental in organizing the event.

“We’ve been working collaboratively with a whole bunch of departments in and outside the division of student affairs,” Shaffer said.

Some of these departments include Tuttleman Counseling Services, CSS, the Office of Student Conduct and the Office of Compliance and Student Services in Athletics, as well as fraternities, sororities and student organizations, such as the Feminist Majority Leadership Alliance.

“It was always a collaboration between [HEART] and Athletics, it started that way, as a hope that we could collaborate with specific teams,” Schaffer said.

While this is the first time Walk a Mile will occur on Main Campus, similar events to raise awareness of and protest sexual violence have been hosted in the past.

Take Back the Night, an international march started in 1975 in Philadelphia to raise awareness of sexual violence and abuse, brings women together to march holding candles. HEART, FMLA and VOX Campus Voices for Planned Parenthood held a Take Back the Night march on April 5, 2011.

“We really wanted to find a way to get male students involved,” Chestnut said. “Walk a Mile is uniquely designed to allow for male student participation, and so we thought it was a nice complement to some of our other events. Take Back the Night is traditionally a female event.”

Before the walk, Chestnut and Stephanie Ives, dean of students, will speak to walkers and sponsors. The march, which will be silent, begins in Founders Garden and trails the exterior of campus.

HEART and its collaborators have held shoe drives and opened donation boxes to collect shoes for the walkers.

On March 13, Temple College Democrats, Queer Student Union and FMLA collaborated to host a screening of 2011 documentary “Miss Representation.” The goal of the screening was to enlighten attendees of the media’s portrayal of women and to raise shoe contributions for the Walk a Mile event.

Holly Genovese, the events coordinator for TCD, said “Miss Representation” focuses on the media portrayal of women in the U.S and how that translates into fewer women in positions of power.

“FMLA wanted to do something for Walk a Mile so [they] had allocated the rights for the film,” Genovese said.

She added that the message of the film and the implications of Walk a Mile aligned with TCD’s beliefs, so they chose to host the event with FMLA.

Schaffer said that the shoes the “Miss Representation” screening collected, added to the donations and other shoe drives held throughout campus, should provide enough shoes for at least 100 walkers.

Chestnut stressed that one of their main goals for Walk a Mile, in addition to raising awareness, is to encourage victims of sexual assault to report their attacks.

According to the Rape, Abuse and Incest National Network, approximately 60 percent of sexual assaults are not reported to the authorities.

Chestnut attributes this statistic to several factors, which includes a sense of guilt and shame, possible social repercussions or an unwillingness to repeatedly retell the incident to authorities.

“We can’t echo enough the value of reporting,” Chestnut said. “It holds people accountable for behavior. Serial rapists or serial people who perform sexual assault don’t modify behavior without there being higher levels of consequences. If we only chose to share our story so that somebody else never had a story to tell…that’s really valuable.”

The hope, Chestnut and Schaffer said, is to make Walk a Mile an annual collaboration to continue raising awareness.

“It’s a really wonderful collaboration,” Schaffer said. “And not to a degree that doesn’t occur often or anything, but to a degree that we in our work here don’t often have the opportunity and the passion and drive from so many people across the university.”

“It’s just so amazing how many people have come out and, from the get-go, really expressed their personal and professional drive to have something like this occur on our campus and really shared stakeholders all the way, and shared resources and shared opportunities and word of mouth,” she added.

Registration is still open for walkers and for sponsors to pledge support and donate shoes. For more information about the Walk A Mile event on Main Campus, visit its website available through the Division of Student Affairs.

National and local domestic abuse and violence shelters offer their support to victims sheltered-in-place with their abusers.

Men don heels for a cause

07 April 2015 Colton Shaw Around Campus, Features, People You Should Know

Through Walk a Mile in Her Shoes, students attempt to raise awareness of sexual violence.

Is the #MeToo movement for A Cute Ebony Doll?

The Intersection Editor, in solidarity with other survivors, reflects on their #MeToo experience.