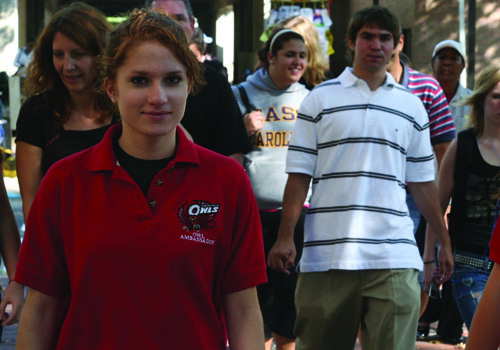 More students and their families visited Temple last year than ever before, according to an announcement by the university’s Office of Undergraduate Admissions.

“Visitors are coming from different states, and the number of international visitors has skyrocketed,” Niki Mendrinos, associate director for campus visit programs and special events, said in a university press release. “We’re also seeing a huge jump in the number of Temple alumni who are bringing their kids to see Temple.”

The official tally of 30,042 is 20 percent more than 2006. The number of admissions-related visitors coming to North Broad Street per annum has more than doubled since 2004, Mendrinos said. The number of scheduled group tours bumped from 40 in summer 2006 to 53 in summer 2007. Attendance at fall open houses increased from 3,400 in 2006

The increase in visits has corresponded to applications, according to the release.

Undergraduate applications are up 44 percent since 2000.

That, in turn, has seen a growing population on Main Campus and beyond.

Total enrollment on all campuses rose nearly 20 percent from 2000 to 2006, now at more than 35,000. The Class of 2011, which is finishing its first year at Temple, was the largest in university history, according to the Department of Institutional Research.

That class was about 500 students larger than originally planned, Karin Mormando, associate director of admissions, told The Temple News in September, but, in noting the growth was a planned administrative initiaitve, said the rapid increases would slow.

“We’re actually looking at a smaller class for next year,” she said. “It will stabilize after that.”

Also read: “The guiding life of a tour guide” and commentary called “Our largest has come.”

Shawn Abbott will fill the new position after working for New York University and the Department of State.

Alumnus Faltermayer discusses why job prospects aren’t as bad as they seem.

Recent and past alumni spoke to students about what can be done with a sociology degree.