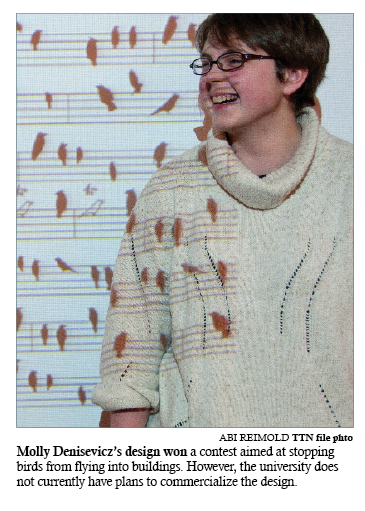 The winning design of the Bird’s Eye View contest may not see widespread use.

As a response to the approximate 1,000 bird deaths on Main Campus every year, the Birds’ Eye View competition hosted in Tyler School of Art, focused on raising awareness about the collisions and intended to produce designs that will alert birds as they fly closer to objects. However, the university does not currently have plans to mass produce the winning designs for use throughout Main Campus.

“The primary goal was to raise awareness about this problem and to get the students thinking about what kind of design they would design for commercial use. So, I think it was twofold. It wasn’t really to say, ‘Oh, we are going to sell it to a vendor,’” said Sandra McDade, the vice president of operations in the office of sustainability.

In mid-February, sophomore Molly Denisevicz was named the winner of the competition, with a design that was inspired by power lines and the score of “The Cardinal.”

“I looked to where birds feel safe in urban spaces and most times they are on the power lines and I related that to music,” Denisevicz said.

Since Denisevicz was named the winner, the university has displayed her design along with other entries on the corner of Paley Library, but currently has no further plans to utilize the designs McDade said.

“Now, nothing is in a commercial application at this point to put the student’s design on a film. There are companies that make these films and they know what our students have done. But, right now, they have not connected,” McDade said.

With  the spring migration period, the university is currently testing both the screens displayed on Paley and the decals on the west side of Beury Hall.

“It is now the spring migration season, so birds are moving around and the library has been a traditional place where birds crash into the window. So, we are in an experiment stage…We are still seeing how effective these designs are,” McDade said.

Senior biology major Haley Gilles has researched the bird collisions on campus since Spring 2011 by keeping tally of how many birds died and where the collisions occurred.

“It is only going to get worse, so it is really important to get on it now. There have been a lot if endangered birds that have hit here and all down the east coast and all around the world. It is an increasing threat,” Gilles said.

As a part of her research, Gilles received funding in Fall 2011 to put milky white film bird decals on Beury Hall and she observed a decrease in the number of bird collisions.

“It reduced the collisions, definitely, but it wasn’t 100 percent effective because they were far apart and we got a lot of small birds here that think they can weave in through little areas,” Gilles said.

Aside from placing patterns and decals on windows, both McDade and Gilles know that there are a number of different steps people and the university can take to reduce bird collisions. Gilles argues the university should stop constructing buildings primarily made of glass.

“My hope would be that they would stop building the buildings that are sheer glass, like the new architecture building and [the] Pearson and McGonigle [renovations]…It would be great to change the design, but it might also change with what people want. Right now, they want glass, but in the 1970s they wanted buildings that looked like Beury,” Gilles said.

Whether the university decides to place screens or decals on problematic windows to help reduce the bird collisions or not, Gilles said, she realizes “you can’t save the world all at once, just small changes.”

Laura Detter can be reached at laura.detter@temple.edu.

With all the publicity about Temple’s explosive student growth, along with all the new construction on campus, students often wonder how housing could possibly be keeping up. After all, before the surge in students, Temple

After serving as dean of the Tyler School of Art for two-and-a-half years, Keith Morrison announced his decision to step down from the position earlier this month to pursue his own projects.”I thoroughly enjoyed working