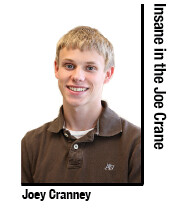 Junior running back Matt Brown emerged from the locker room after he led the Cherry squad to a 17-10 win in Temple’s annual Cherry and White scrimmage on Saturday, April 14, and said to the media, “This is the man you need to interview right here, No. 5.”

Brown was pointing to sophomore Jalen Fitzpatrick, whose position can’t clearly be identified because he can do so many different things on offense. Fitzpatrick is listed as a wide receiver, but played quarterback in high school and will see time as a tailback in the upcoming season.

Fitzpatrick, who rushed for 40 yards on five carries for the Cherry squad and won the spring award for the offense’s most improved player, brings versatility to a fractured Temple backfield that lost the program’s most prolific running back in Bernard Pierce to the National Football League draft this offseason.

“[Fitzpatrick will] be involved in everything,” coach Steve Addazio said. “He’ll be in and out of the backfield. He’ll be catching routes underneath. He’s dynamic, fast, explosive, he can stop on a dime. I’m very impressed with him. He’s an explosive guy.”

“Matthew Brown and Jalen Fitzpatrick. No. 2 and No. 5,” Brown said is all that there is to know about the new-look Temple backfield.

Fitzpatrick, a Harrisburg, Pa. native, passed for 1,743 yards and 17 touchdowns and rushed for 1,116 yards as a senior at Harrisburg High School. He came to Temple as a part of Addazio’s first recruiting class after competing in the 2011 Big 33 Football Classic ranked as a two-star prospect by Rivals.com.

Behind five quarterbacks on the depth chart, Fitzpatrick was converted to wide receiver in his first year. Fitzpatrick played in 11 games on the special teams unit and was one of five true freshmen to see game action.

“My expectations coming in were literally doing anything to help our team win,” Fitzpatrick said. “That’s still my goal, to play anything they want to do to help the team. If they put me at quarterback, I’d do that again, too. My progression has been to get better at anything they put me at.”

With Pierce and Brown providing one of the best one-two punches at running back in the country and a receiving corps chock full of upper classmen, Fitzpatrick’s versatility has been tucked away until this season.

Addazio said after the Cherry and White scrimmage that the offense will do whatever it can to get the ball into Fitzpatrick’s hands.

“I’m really excited about our running backs,” Addazio said. “[Fitzpatrick] is a very exciting guy. He’s an electric player that can play an inside receiver/tailback [position]. We didn’t really utilize him [Saturday] the way we probably will utilize him.”

Addazio has a history of using players who can do multiple things in a spread offense. Tim Tebow was the leading passer and rusher in Addazio’s offense at Florida for three straight years, and a Fitzpatrick comparison to Gators’ sophomore running back Trey Burton, who had 32 catches, ran for 349 yards and threw the ball in Addazio’s last year at Florida, wouldn’t be unreasonable.

Bottom line: Fitzpatrick fits right into what Addazio likes to do.

“We have [Brown] who gives all that energy and is a great pure running back who reads so well and then we have [Fitzpatrick] who is learning all of that stuff, but has that receiver feel to him as well,” Coyer said. “It’s great to have him coming out of the backfield, moving out of the slot and all over the place. He’s going to be a good player for us.”

“[Fitzpatrick] is really coming along, he’s a good player,” Brown added. “I feel good that there’s a player behind me that can basically do all the things that I can do.”

Despite Pierce’s departure, the Temple backfield can still make a lot of noise this season with Brown and Fitzpatrick – just expect varied tones and volumes.