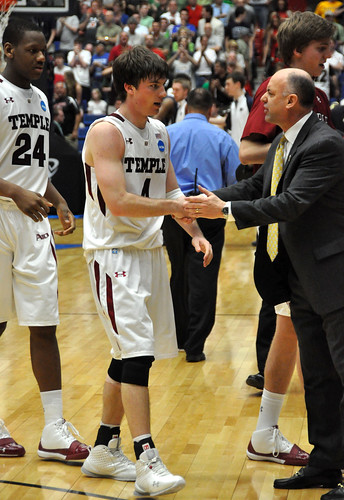 JOHN MEHLER TTN Junior guard Juan Fernandez walks off the court after scoring a game-winning basket with .4 seconds left on the clock.

Fernandez, who finished the game with a season-high 23 points on 8-of-13 shooting, took the ball with 11.4 seconds left in a tied ball game. Penn State sophomore guard Tim Frazier drew the assignment of guarding Fernandez. The Argentine forced Frazier to jump to his right, at which point Fernandez sank what might have been the most rewarding shot of his life.

“I was thinking about shooting a jump shot but I killed my dribble and (Tim) Frazier was right there,” Fernandez said. “For some reason he jumped over to my right and that gave me the space to go left.”

“Before he shot, I kept thinking, ‘Please hit this; please hit this shot.’,” junior guard Ramone Moore added. “I did not want to go into overtime.”

16 seconds before Fernandez’s dramatic game-winner, Penn State senior guard Talor Battle made his own moment as he drained a 28-footer to tie the game at 64. During the play, Battle saw a bit of space in the Temple defense and sank his shot well past the three-point arc.

“I saw [former NBA great and current TNT television analyst] Reggie Miller and them going nuts, so I figured I was pretty far when I shot,” Battle added.

At one point, Moore scored 11 of Temple’s 13 points over a six minutes and nine seconds span. During that time, Moore felt obligated to take over the game offensively, he said.

“Penn State was making a lot of baskets and I kind of got on a roll,” Moore said. “I think I capitalized, which is something I need to do for this team. Being one of the leaders in this type of situation, I think it’s something I had to do and come through for the team.”

Battle finished the game with 23 points to lead the Nittany Lions. Battle, who finished his career as Penn State’s all-time leading scorer, started the game off 3-of-4 from the field but went into a 2-for-11 slump before finding some success towards the end of the game, including his game-tying shot.

Sophomore guard Khalif Wyatt added 10 points off the bench for the Owls in 34 minutes of play. For a significant portion of the game, Wyatt was also given the duty of guarding Battle.

“He’s a great scorer and a very talented basketball player. I was just trying to make it as hard as I possibly could for him to score. I think we did a pretty good job on him. I think we let him up for on that one play down the stretch and he made a really big shot.”

The win improved Dunphy’s overall NCAA tournament record to 2-12 and 1-3 at Temple. Dunphy’s 10-game losing streak in the tournament was the longest of all time.

“I would be lying if I told you I [hadn’t thought about the losing streak],” Dunphy said. “I’m so thrilled for these kids and so thrilled to be in the tournament…People will recognize what the record is, but I got to tell you, that’s not what drives me.”

The Owls will play again on Saturday against the winner of the Northern Colorado – San Diego State game. Regardless of the opponents, the Owls are conscious to not be content with one win.

“It’s big, but it doesn’t mean much,” Randall said. “We came here to win the tournament, not just the first game. We came to this school thinking, ‘Why not us?’ and here we are. We can celebrate tonight, but we’re gonna work hard tomorrow and get ready.”

Kyle Gauss can be reached at kyle.gauss@temple.edu

Temple allows the most points per game in the American Athletic Conference.

Men’s basketball falls off the bubble after two AAC losses

Treading water in A-10