Women across the world have joined the SlutWalk movement to reclaim the word “slut” after a Toronto police officer’s  comment regarding sexual assault. 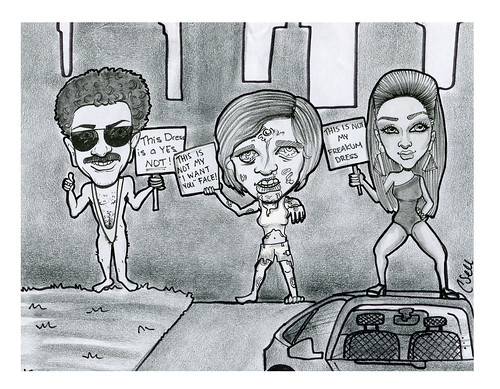 I am a slut. I wear form fitting jeans, cropped tops and high heels to show off my exquisite features and hope that my outfit calls for an assailant.

When giving women tips on how to protect themselves from being assaulted, a member of the Toronto police suggested – despite his admitted better judgment – that women should refrain from dressing like “sluts.”

This instantaneously erupted into an uproar and gathered women in the Toronto community to lead the first march to reclaim the derogatory term in the new controversial feminist movement, SlutWalk.

Walking in scantily clad outfits, armed with posters and the word ‘slut’ even written on their bodies, chants could be heard from men and women of Toronto, London, Boston and Philadelphia. They have banded together to walk against sexual assault, violence against women and victim blaming. Like the queer movement, the aim is to give women the power to lead their own sexual lives and not be considered promiscuous, strange or immoral for how they dress or the life choices they make. Furthermore, this movement brings awareness to the public to show that women can embrace their bodies and not be considered a slut.

Critics have seen these demonstrations as a new generation of feminism gone wrong. I would disagree; instead this is a wakeup movement asking people to look past the derogatory term ‘slut’ and look deeper into the victim’s plight.

Women don’t get dressed in the morning hoping that their outfit calls the attention of someone who wishes to hurt them. This police officer was blatantly blaming the victim.

According to Excalibur.com, Ronda Bessner, an attendant who was present during the officer’s remark said, “I think the problem with the constable’s conduct was that he was blaming the victim. He’s also not making victims feel safe to go to the police. It’s quite astounding that in 2011 you hear comments like that from a professional.”

It is customary for female victims of sexual assault to seek the blame within themselves, and for this, reason many of these crimes go unreported and undocumented.

Women dressing in skirts, attending clubs, drinking and being their own bread makers makes them even more of a target, even in a society that urges women to be successful. As women take over colleges, upper-level corporate positions and continue to earn more in the household, the victimization of women thrives because of words such as ‘slut’ and ‘whore.’

Instead of giving women the safety they crave as they make their way home from a long day of work or from a fun night out, the Toronto police officer’s comment gives women a reason to not want to report a crime. In any case, women dressed raunchily are just as unsafe as those women who are conservatively dressed when it comes to sexual assault.

Victim blaming ideology is very real and SlutWalk is bringing this issue to the forefront. SlutWalk is trying to reclaim this derogatory term and turn it into one of empowerment.

SlutWalk negates the ideology and implications of victim blaming beliefs. This movement can potentially help victims muster the courage to know the crime against them is not their fault. What you wear doesn’t make you a slut.

For more information about SlutWalk and where they will be next, visit slutwalk.com.

The international event SlutWalk comes to Philly, as participants protest against sexual assault, rape and victim blaming. On Aug. 6, hundreds of men and women of all shapes, sizes and walks of life filled the

Temple’s Board of Trustees chairman Patrick O’Connor could be called in Cosby trial, judge says

O’Connor could be called if Montgomery Court of Common Pleas Judge Steven T. O’Neill decides to allow Cosby’s 2005 civil suit into evidence, he said in court on Thursday.