A Parisian-themed celebratory  street carnival marked the end of the Philadelphia International Festival of the Arts.

For six blocks down South Broad Street, from Chestnut to Lombard streets, the French Parisian spirit invaded Philadelphia on April 30.

As the grand finale for the Philadelphia International Festival of the Arts, the Kimmel Center and its collaborators shut down Broad Street to hold a French-inspired street fair, complete with a Ferris wheel, mimes, acrobats, outdoor cafes, two performance stages and more. 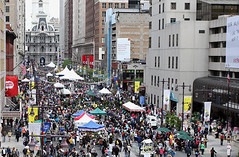 In its first year, PIFA’s mission is to bring art and cultural inspiration to Philadelphia from other cultures around the world. It’s no surprise the theme this year was French, either.

Philadelphia and Aix-en-Provence, a southwestern city in France, are sister cities, but the two cultures share more in common. The Benjamin Franklin Parkway was modeled after the Champs-Élysée, and many architects compare the tree-lined Schuylkill River to how the Seine River flows through Paris. There’s also the cobblestone streets lined with wrought iron-worked houses and outdoor cafes that give Philadelphia an inexplicable Parisian feel.

Last year, Mayor Michael Nutter announced a 35 percent cut from the Philadelphia Cultural Fund, a nonprofit corporation founded in 1991. However, the carnival was more than necessary to keep Philly’s arts thriving.

The festival’s goals were to advocate the value and importance of the arts to the advancement of a community, to preserve Philadelphia’s culture and art to espouse pride throughout the city and to provide funds to art and culture organizations within the city. With such a severe budget cut, the future of Philadelphia’s rich art and culture heritage was in severe risk.

Wess Meixell of the Walnut Street Theatre said he believes arts are underrepresented and underappreciated in the city, and people – men especially – don’t give it enough attention.

“Philly does not have a vibrant arts program,” he said. “We could be more creative, more aggressive. I think they’re doing a good job [with PIFA], but every year it could be bigger and better.”

Meixell, a 1980 Temple alumnus, said the Walnut Street Theatre is the oldest theater in the United States, and the continuation of the arts for this theater is more than important – it also has the largest subscription-based clientele in the English-speaking world, and all of its productions are cast locally first. Without the city’s help, this national landmark may cease to exist.

But on Saturday, the arts were rich and vibrant on the streets. Thousands of people from the city and its surrounding suburbs, as well as New Jersey, New York and Washington, D.C., came to the attraction for a little slice of France.

The aromas of buttery crepes, organic thyme and rosemary and local wines wafted over the endless circus-top tents filled with face painters, vendors selling environment-conscious wares, Wolfgang Puck’s culinary delights, circus balloon animal crafters, Vietnamese cuisine and chances to win various raffles through the Kimmel Center. Thousands of visitors of every age milled about the streets, enjoying the beautiful day in the city.

“I don’t come to [Philadelphia] as often as I’d like to,” said Marion Kimmerly, 51, of Lansdale, Pa. “But I heard about [the street fair] on WXPN and came.”

“I think it’s lovely. It’s just wonderful,” she added. “I wish [the city] would do more things like this. We need more art the community can engage in together.”

Two graduates will have artwork on display near the mayor’s office.

Rugby teams to appear on NBC

The club rugby teams will make their TV debut in June on NBC. When the men’s basketball season ends in March each year, that usually spells the end for Temple sports appearing on national television,

The assault was reported in an off-campus residence on Broad Street near West Girard Avenue early Saturday morning.