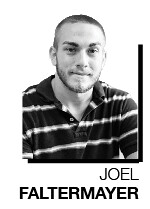 Intellect is no bi-partisan debate.

If there’s one thing that can be learned from every national election coverage, it’s that there is no possible way to be actively political without espousing an inferior, “wrong” other. It is simply the nature of strategy and rhetoric: to win over others, one’s opponent must be deemed misguided.

Hence, President Barack Obama’s policies are declaimed as “fascism” by websites like americanthinker.com, while badrepublicans.com makes a similar vilifying claim about republicans.

While I try my best to withdraw into political apathy at comparisons like these, there is simply no way for me to reconcile such perspectives with the reality of American politics that I, as well as a majority of equally rational, self-interested individuals, perceive.

As it is impossible to describe this phenomenon without sounding elitist, I would justifiably call such brash categorization “dumb.” It comes as no surprise to me that two separate sociological studies since February that claim a “link between conservatives and low-effort thinking,” are subject to misinterpretation.

Without even reading either study, one can imagine the irate comment threads that will undoubtedly erupt throughout the Web.

But there is no doubt that many of us will feed intelligibly into this debate. Surely we hold our political beliefs dear to our identity, and any attack, regardless of its depth or validity, cries out for retort. My personal reaction was one of resigned dismissal – or “duh” – therefore allowing the article to validate my sense of intellectual superiority.

Whether one becomes sensibly ignited or rationally appeased, our instinctive reactions suffer from the same “low-effort” naivety that these studies highlight. Instead of generating a response worthy of the education that we are lucky to have, we show an “inability to process information thoroughly,” which is typical of alcohol consumption, according to the first of the aforementioned studies.

Psychology professor, Dr. Brian Nosek from the University of Virginia, explained this dynamic to the Huffington Post with notable ease, stating that, “Reality is complicated and messy…ideologies get rid of the messiness and impose a simpler solution. So, it may not be surprising that people with less cognitive capacity will be attracted to simplifying ideologies.”

In other words, when we engage in such nominally partisan-driven, poorly covered and often generalized political views, we contribute to an all-around dumber society.

This debate questions the consequences of labeling. “Liberal” insights more anxiety as the antagonist to “conservative,” and therefore has lost all value as a descriptive term. Furthermore, we assume such identities only because we fail to communicate our own organic beliefs. They deny us the ability to think and act as individuals, while allowing others to displace and target us for economic, political or social gain.

Don’t get me wrong, this is no barometer of society anymore than a harangue of grandfatherly “kids these days” ranting. Ignorance, rhetoric and generalization will continue as they have since the development of language, and no skyline of ivory towers will change this. However, whether graduating or starting at Temple, students are given the opportunity to claim intellectual independence for themselves, and therefore avoid the trap of “low-effort thinking.”

But just as many of us have experienced that inflated sense of authority when taking a general education or Core class related to our respective majors, we experience the same intellectual vanity as members of a university-educated minority in a very paranoid political atmosphere.

Particularly, as campaign season has started, we must remain vigilantly doubtful of both our assumed identities, as well as the claims of others while knowing when to bite one’s tongue. Most of us could not change the nature of politics anymore than we can tell the horror movie actress “don’t go in there” through the TV screen, yet we can remain aware of it.

Ahsan argues that to successfully combat global warming, everyone needs to come to terms with it and pitch in.