After opting out of the NBA Draft, Lavoy Allen returns to Temple with a new vision for his final season on North Broad Street.

When the 2010-11 season is said and done, senior forward Lavoy Allen of the men’s basketball team may go down as one of the most prolific Owls of all time.

In his three years on Main Campus, Allen has started 99 games, scored 1,069 points and grabbed 854 rebounds, the seventh-highest total in program history. Allen needs just 189 rebounds to pass John Baum for the most ever. He’s been named to the All-Defensive Atlantic Ten squad twice and was recently named to the watch list for the Wooden Award, an award given to the nation’s best collegiate player. During the summer, however, Allen almost gave it all up when he declared for the NBA draft.

After entering his name into the early entry pool, Allen was brought in for a workout with the Portland Trailblazers, one of two NBA teams with workouts geared toward non-seniors. Ultimately, after having two flights canceled on his way from Philadelphia to Portland and back, Allen decided to remove his name from the draft before the deadline. Since Allen never hired an agent, he was still eligible to return to Temple for his senior year.

The decision to return had a lot to do with the Portland administration’s honesty, 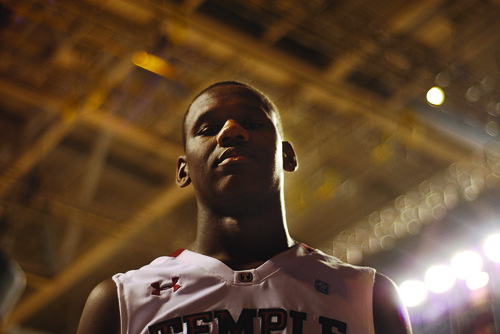 ANNA ZHILKOVA TTN Lavoy Allen practiced with the Portland Trailblazers this past summer but decided to come back to play for the Owls this season.

“When I declared for the draft, I worked out with the Trailblazers, and they gave pretty good feedback,” Allen said. “But they told me I should really think about going back to school to get another year under my belt, so I really took that advice, and I decided to come back.”

Allen’s decision to return to North Broad Street paid extra dividends when he was chosen as one of 20 collegiate players named to the USA Men’s Select Team. The team practiced against the USA Men’s National Team that won the 2010 International Basketball Federation Championships. For this experience, Allen traveled to Las Vegas, where his squad would train against NBA stars Rudy Gay, Kevin Durant and Lamar Odom.

“I started working out with the USA team, and that was a great experience,” Allen said. “I was playing with some of the best players in the NBA, and that shows you how far you have to go. The work ethic of those guys is really good.”

“A lot of the guys from the Oklahoma City [Thunder] got a lot of extra workouts in,” Allen added. “They’d work out before practice, and then they’d go back after practice and get some more shots in. It really showed me how hard these guys work to get where they’re at.”
After a summer of life-defining experiences, Allen recommitted himself to Temple basketball this fall.

A First Team All-A-10 selection last year, Allen demonstrates talents that have also helped improve his teammates’ play. During team practices, Allen often goes up against junior center Micheal Eric, a process that has had an effect on both players, Eric said.

“It’s always a battle in practice between me and him,” Eric said. “Even though we’re both best friends on the team, we really want to go hard [in] practice. By the time we face other players, it’s like, if I can guard Lavoy, I can guard them when game time comes.”

“I think it helps out both ways,” Eric added. “I’m learning from him, and he’s learning from the way I play. I think one of the great things about him being on this team is being able to go against each other.”

Since lead scorer Ryan Brooks graduated, Allen, who has never scored more than 23 points in a game, will likely need to increase his offensive numbers for the team to be successful. The 6-foot, 9-inch forward’s work over the summer will make that easier, coach Fran Dunphy said.

“I think [Allen’s work with the USA select team] will help him,” Dunphy said. “I think he understands what his role is. His role is a little different this year than it may have been in past years. He’s always going to rebound and play great defense, but we need him to score a little bit more.”

Dunphy said the team needs Allen to play more aggressively on offense in general and for his average to reach the midteens on a regular basis.
Allen said his main goal is to score more.

“I want to score inside, outside and through a variety of ways,” Allen said.

Despite his emphasis on offense, Allen said he also wants to remain true to what’s gotten him where he is.

“I also want to keep my rebounding up or improve it,” Allen said. “I averaged around 10 [rebounds] last year. I want to get a little more. I want to try to be one of the best players in the country.”

By this time next year, Allen may very well have realized his dream of playing in the NBA. Until then, he’ll focus on his current goal – leading Temple to its fourth-straight A-10 title.

Temple Athletics: 10 reasons why you should care about your Owls

With the men’s basketball team and women’s basketball team’s coming off NCAA Tournament berths, the football team returning after a decade of irrelevance, and school records being broken, now is a better time than ever to pay attention to what’s going on with the Cherry and White.

George Washington can not tell a lie nor stop Allen