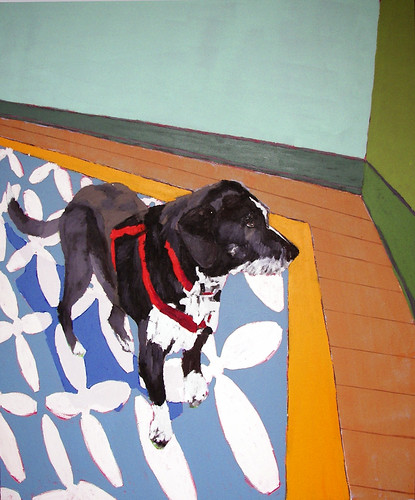 Most people can’t become engaged in a work of art unless it speaks to them. It must be at least relatable, even if not completely realistic. Human nature renders most people emotionally distanced from things that do not reveal a part of themselves.
May’s First Friday exhibitions are all about human connection.

This month’s artists, shown at the BlinkArt, Silicon and Knapp Galleries, express thoughts that are common to most people yet rarely vocalized in artistic work.

Have you ever felt like your dog has its own mind and feelings? Do you often become frustrated with the limits of your own artistic abilities, or do you feel that the power of battling opposing emotions is the bane of your existence?

Most people experience such sentiments at least once in a lifetime. These three exhibits were produced to connect with these people and bring their emotions to the table.

Jay McClellan, an artist showing Tip and Honey and Painting at the BlinkArt Gallery, realizes that all dogs are unique. Using his own two dogs as inspiration for his paintings, McClellan depicts the inimitability of each individual man-to-dog connection.

McClellan tells the story of his own connection to Tip and Honey rather than simply showing physical manifestations of this connection. Like most dog owners, McClellan sees a reflection of himself in his pets and tries to portray that through his art.

At the Knapp Gallery, an exhibition aptly titled Wide Awake represents the frustration of the creative process for artists of all types. Gigi Chen, an animator, painter and illustrator, uses her artistic skill to depict metaphorical characters who are products of her own mind, created in the midst of aggravation experienced while trying to express herself.

The animated characters and animals Chen creates represent her mind’s attempt to better understand her inner dialogue. They are manifestations of her imagination who battle one another for supremacy in the episodes depicted in her paintings and drawings.
Chen’s work enthralls viewers and allows them to relate to her feelings of artistic limitation. Her desperate desire to bridge fantasy and reality manifests itself in engaging, informative illustrations.

Finally, the portfolio of digital prints by Philadelphia artist Judith Schaechter at the Silicon Gallery proves innovative and gripping to viewers. Schaechter, most commonly known as a stained glass artist, attempts something new in her print portfolio by recreating glass works with a variety of digital software suites to create a portfolio of 10 digital images.

Schaechter’s works, all of which are printed on German cotton rag paper, attempt to materialize the viewer’s notions of clashing subjects such as beauty and ugliness, salvation and damnation, and fear and joy. At the same time, the artist successfully inserts a meaning into each piece that is significant to her own life.

Schaechter began her artistic endeavors by pushing the boundaries of the ancient medium of stained glass and did so with victory. Hence, it only seems logical for her next step as an artist to push the boundaries of a new medium. Although viewers are able to interpret Schaechter’s complex artwork as they wish, she will always be just a few steps ahead.

As art enthusiasts, exhibits that truly hit home may be what we need to keep us engaged and interested in up-and-coming work. And this month’s First Friday will be the time to finally see just that.

In the know:
BlinkArt
108 Chestnut St.

This is Chink’s Steaks, a restaurant with a reputation of great food and an infamously controversial name.

The kickoff for the biannual festival, FiberPhiladelphia, is during this month’s First Friday. March’s First Friday marks the beginning of an exciting two-month, citywide event celebrating a medium that’s often overlooked in the world of fine