STDUniversity.org emerged early this month and was developed to provide personal and anonymous information for young adults and college students. 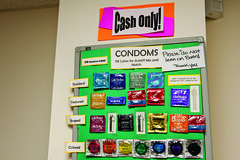 “The goal is to give people an easy resource to get credible information from,” Dr. Neil Skolnik, a professor of family and community medicine, said. “There is a lot of information available on the Internet about STDs, and some of it is inaccurate, and some is confusing.”

Skolnik was one of the health experts who reviewed the content on the Web site, which displays medical information about common STDs, including ways they’re transmitted, possible symptoms and treatment methods.

“The message has to get out about being careful about STDs, especially for young people and college students, because there is an incredibly high risk for that group,” he said. “You want to provide information to make people more aware of the situation.”

A 2008 study by the Center for Disease Control and Prevention found about 19 million new STD cases occur every year in the U.S. Nearly half of those infected are between the ages of 15 and 24, the study reported.

Visitors to STD Univeristy can complete a series of questions involving background information about sexual partners and personal health history. Based on the responses, the site instantly suggests which STDs participants may be at risk for and the appropriate tests to take.

According to the Web site, its recommendation tool incorporates screening guidelines from the CDC, as well as other federal health agencies.

Undergraduate Program Director and Associate Professor of Public Health Sarah Bauerle Bass, Ph.D., said she would not advise her students to use the Web site as a reference because she believes it lacks detail on each STD. Bass also questioned the validity of its content.

“It’s hard to assess someone’s risk in certain STDs by asking only three or four questions,” Bass, who researches risk and health communication, said. “I think it tries to pigeon-hole you in a certain category, and that’s problematic.

“In general, all college students are at risk for just about any STD, if they’re sexually active and having multiple partners,” Bass said, adding that the Web site should include more information pertaining to prevention, which she described as the most important part of STD education.

Junior Amanda Stellwagen, a public health major considering a career in disease prevention and control, agreed with Bass regarding the need to universally reinstate STD prevention or protection methods in high school curriculums.

“The earlier people learn, the better. You can’t just [suggest] abstinence because obviously that’s not going to happen with the amount of teen pregnancies and STDs in high schools,” Stellwagen said.

Several students said the Web site may offer a beneficial resource for those unsure about their current risks for STDs or others embarrassed to seek clinical help in person.

“I think with the advent of instant communication, it’s not like medical prowess is really limited to people who are doctors,” freshman legal studies major Asha Green said. “All the information is constantly out there, and it obviously is going to do more good than harm.

“[The Web site] is definitely better than going to the doctor’s office, where you have to wait and have [to pay] a co-pay,” she added.

According to the site, STD University attempts to educate young adults by featuring multimedia content “to enhance learning in a contemporary, non-commercial, non-judgmental way.”

The test recommendation service, along with other media available on the Web site, such as music downloads and a STD prevention film, are all free and accessible to the public.

“I think [the Web site] can be really helpful. It’s good to have a place where you can get all the knowledge you need,” said freshman classics major Matt Walton. “I don’t think enough people know about [STD testing].”

Research has found that of the sexually active women between the ages of 15 and 24, about 80 percent receive contraceptive or STD/HIV services, but only about half that group obtains both, according to a 2008 report by the CDC.

Associated with this lack of active testing among young adults is the likelihood that STD symptoms go undetected, the Web site states.

“It is especially true for women,” Bass said. “Women would almost have no symptoms or maybe just a few” if common STDs like chlamydia or gonorrhea are present.

According to the CDC, other reasons for increased STD rates in young adults include biological susceptibility, risky sexual behavior and limited access to health care.

“It’s not that we don’t have the knowledge [about STDs], but it’s just college kids are not the most responsible,” Stellwagen said. “The resources are already available for us here to get tested, people have just been choosing not to.”

Connor Showalter can be reached at connor.showalter@temple.edu.

Raising your grade from a B to a B+ might not be worth the extra hours of sleep you’re losing. Experts say there are benefits to getting the right amount of sleep – and detriments to staying up.

‘Freshman 15’ not just for freshmen

Students of all ages fear the extra weight. In an IBC event, a nutritionist dispels the myths.