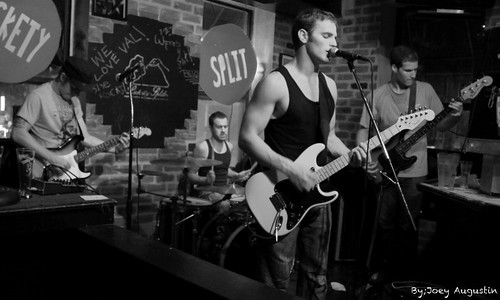 Freshly formed in April, Those Guys have been spreading their “funktarded-with-a-bounce sounds” throughout Philadelphia.

They began jamming together in basements and quickly established a fan base, which allowed them to play on the same stages of well known bands like Brand New and The Dear Hunters.

Guitarist and lead vocalist Taylor Buschmann, and bassist Andrew Rohe, previously worked on another project before it fell through.  A year later, they reunited and Buschmann moved to the Fairmount area where he met Chris Terranova, a drummer and Temple student. They then found their fourth member, William James, a guitarist and vocalist while on the same bill.

From different backgrounds, influences and inspirations, they have created a sound that continues to change with the seasons. Whether it is from jam sessions, their favorite artists or from the non-stop banter, they are currently putting those inspirations into a double-sided album. The album’s to-be title is “Left and Right,” which they hope to release by Halloween.

“The album name comes from a historical gamble of left and right,” Rohe said. “We’ll call the darker side left and the other one right. Left was always considered to be evil, the Latin word for the left is ‘sinestra’, which means sinister.”

With seeds planted for an EP, the guys described how their sound has grown to be “funktarded.”

“A lot of the stuff earlier on had almost a Western feel to it but as we have grown together. We’ve been getting rockier, funkier, getting a little bit of a bounce to it,” Buschmann said.

“Yeah, we’ve been combining everything we listen to together. Well, individually and then just applying it to how we play,” Terranova added.

Most of their music and ideas comes from going back into the basement and simply jamming together. The band joked about how dark their summer was, and how forlorn things could possibly transpire when winter rolls around.

“We just jam and I guess on the mood of how everyone is feeling, something might stick out,” Buschmann said. “We went through a little dark phase. We change with the seasons.”

“I can’t wait to see what January brings–it may be like summoning Satan,” Rohe joked.

Using social media, such as Twitter, Facebook and running their own blog, Those Guys have quickly built a fan base that brings them to venues all over Philadelphia.

“We have a lot of young girls that are coming to see us, 12 and 13-year-old girls,” Buschmann said.

“We’re a lot like Good Charlotte in that regard. We’re going for the ones with the eyeliner and pocket knives– that’s my type of girl,” Rohe added.

A favorite Those Guys venue to play is The North Star Bar in Fairmount.

“The North Star Bar is by far the most fun, especially the space and atmosphere,” Rohe said. “Everything else is falling somewhere on the scale, some better, some worse.”

“I feel like Lickety Split is our home bar. It’s where we got our first shot,” Buschmann added. “We played there three times already. We played Connie’s [Ric-Rac] in South Philly, we played Triumph, the Raven Lounge. We played at Pompeii last week, it was a blast.”

After their line-up of shows this fall and various projects in the works, Those Guys have big plans.

“We want to destroy,” Rohe said.

Their next show will be at Lickety Split, followed by a show at The North Star Bar on Oct. 1. Follow their blog and find out more about who Those Guys are on their website, wearethoseguys.com and their Twitter, @Wearethoseguys.

Stephen Rose can be reached at stephen.m.rose@temple.edu.

In response to the predictable 1990s electronic bands, German duo Walter Merziger and Arno Kammermeier began mixing their own music, which eventually turned into their current band, Booka Shade. The two friends grew up together

ARRAH AND THE FERNS Upon first listen, one might mistake the vocals for Karen O. of the Yeah Yeah Yeahs or Brandi Carlile. Add a touch of country, just a splash of girl rock, combined with a healthy

Tune in each week as The Temple News highlights a touring band that has made its mark on the city. This week TTN met up with Deer Tick