The founder of Temple University had a formula for success.

“Every person in this world is peculiarly adapted to do one thing and do it well,” Russell Conwell said in 1920. “Let him find what the thing is, educate himself toward the development of that inherent ability within him, keep plugging everlasting at it, and he cannot fail to make his work.”

Conwell founded Temple in 1884 and became its first president in 1887.

Born in 1843 in Worthington, Mass., Conwell spent his childhood years on a small farm. As a young man, he studied in the evenings after performing manual labor hours during the day. 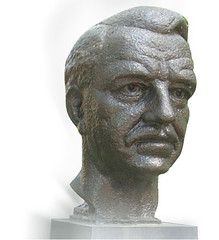 In 1860, he entered Yale University, where he had a private tutor to teach him law courses to save time and money.
The Civil War interrupted his studies in 1862. Conwell served as an infantry captain and was wounded on the battlefield. At the close of the war, he earned a degree from Albany Law School and went to Minnesota to study law.

Things did not go as he intended. In 1867, Conwell was Minnesota’s immigration agent to Germany and the foreign correspondent of the Somerville Journal. In the following three years, he was the correspondent for the New York Tribune and the Boston Evening Traveller.

Conwell traveled around the globe in 1870, attending speaking engagements in India and England as the correspondent for the American Traveller, a weekly journal published in Boston.

He practiced law in Boston from 1871 to 1879 and gained popularity as a lecturer. Conwell was ordained as a pastor in 1879, and in 1882, he left to preach at Grace Baptist Church in Philadelphia at Berks and Mervine streets.

Temple’s place in history began when an ambitious young man with a wife and children wanted to be taught by Conwell. The young man had to work by day to support his family. His efforts to study by himself at night had been unsuccessful. Conwell told the man he would help him one night a week.

The man came with six friends, and by the third night, the number of pupils increased to 40. With little room, it became apparent that the students needed a classroom.

This began the idea that has since transformed into Temple University, an institution with more than 37,000 students worldwide.

Conwell used his famous speech, “Acres of Diamonds,” to encourage students to attend the university. In 1925, he had given the speech more than 6,000 times.

Conwell gave most profits from lectures to students so they could attend the college, keeping only a small amount of money to satisfy his simple lifestyle.

Conwell encouraged his students and told them they could do most anything.

“Your future stands before you like a block of unwrought marble. You can work it into what you will. Neither heredity, nor environment, nor any obstacles superimposed by man can keep you from marching straight through to success, provided you are guided by a firm, driving determination and normal health and intelligence.”

Anthony Myers can be reached at anthony.myers@temple.edu.

A letter from President Hart

Temple was founded as a night school in 1884 and, while it has obviously evolved since, the university should remain committed to offering classes to nontraditional and working students who might not be able to

From its humble beginnings as a night school, Temple has become a first-class school.