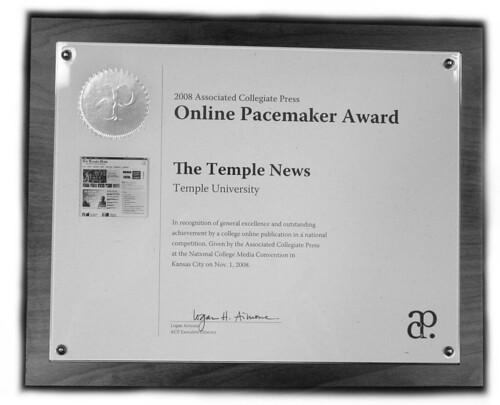 The Temple News was honored Saturday by the Associated Collegiate Press with the Online
Pacemaker Award.

The award is given to only a handful of college newspapers across the country for excellence
in online publications. The selection committee chooses the best college media Web
sites based on design, navigation, writing/editing, graphics and interactivity.

The Pacemaker was presented at the annual Associated Collegiate Press convention in
Kansas City, Mo., Saturday. The Temple News was a finalist in the Online Pacemaker competition
in 2007, as well.

The print edition of The Temple News was a finalist in the Newspaper Pacemaker competition
for the 2006-2007 school year and won the award for the 2005-2006 school year.

A student discusses her hatred for the word “honey” as she acquires positions of authority in the workplace.

Scholarship recipients look forward to sharing their native culture with others at Main Campus.

Coach Matt Rhule is leaving for Baylor University after posting back-to-back 10-win seasons for the first time in program history.