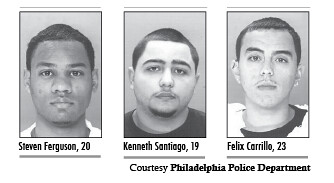 Nearly a week after 2010 alumnus Kevin Kless was beaten to death on the steps of the Second Bank of the United States, his three accused killers have been apprehended.

Police said in a press release that Felix Carrillo, 23, Kenneth Santiago, 19, and Steven Ferguson, 20, were arrested on Friday, Jan. 20, and charged with murder of the 23 year-old Temple graduate. Police, along with U.S. Marshalls, arrested the men after an investigation and tip led them to the suspects.

Leading up to the arrest, rewards totaling $20,000 were offered for any information leading to the arrest and conviction of the suspects. The reward climbed to $20,000 after pledges from the city, the Fraternal Order of Police and the Citizens Crime Commission of Philadelphia.

Kless was killed in the early morning hours on Jan. 14 while trying to hail a cab. Police said Kless shouted toward a cab and, after the cab briefly stopped, three men exited from a passing car and brutally beat him. National Park Service rangers responded initially and administered first aid to Kless, who was pronounced dead later that night.

Kless graduated Temple with a degree in risk management and insurance and had recently returned to Philadelphia to start a job with the insurance broker, Marsh.

He was involved on Main Campus and was a member of Temple’s chapter of Gamma Iota Sigma, a fraternity for students in the risk management and insurance field.

“Fox School of Business community was stunned and saddened to learn of the death this weekend of Kevin Kless, a May 2010 graduate of our school. Kevin, a risk management and insurance major, was an active member of our Sigma Chapter of Gamma Iota Sigma and went to work for the Berkley Group in Harrisburg after graduation,” Porat, who is also the dean of the School of Tourism and Hospitality Management, said. “He recently accepted a position with Marsh and was excited to be back in Philadelphia. We extend our condolences to Kevin’s family and friends as we all mourn the loss of such a promising young man.”

In light of the arrests in the case, risk, insurance and healthcare management professor Michael McCloskey expressed relief that the suspects were put into custody.

“I am glad the perpetrators were apprehended and I hope it can give a sense of relief to his family in what is an obviously difficult time,” McCloskey, who is also a faculty adviser for Gamma Iota Sigma, said in an email.

Sean Carlin can be reached at sean.carlin@temple.edu.

Reduced charges allow defendants in the case surrounding an alumnus who was killed earlier this year to receive bail reductions.

Alumnus left for dead after beating in Old City

Family, friends search for answers in the Old City beating and killing of an alumnus. A 2010 alumnus, Kevin Kless, was killed early Saturday, Jan. 14 after being beaten on the steps of the Second