A student group adapts plans to clean up parts of Philly.

“It was kind of like, ‘Hey, you got anyone that would want to go to New Orleans?’ They pulled five people out, and we went ‘Hello, we’re going to New Orleans in three days – let’s go.’ We met for two seconds. Three days later, we were in a van for 24 hours, and now we’re all best friends,” Epstein, a sophomore sociology major, said.

Epstein’s new best friends are also partners in his latest endeavor, the Philadelphia Urban Creators. Epstein isn’t from Philadelphia, but Denzel Thompson, 16, and Shaniqua Chissolm, 20, live around the corner from the future site of the community garden that the trio is preparing at 11th and York streets, near Fotterall Square.

“We’re not only best friends,” Thompson said. “It’s like a new family that we just made, one that can actually make a change.”

This family’s formation has as much to do with the Gulf Coast and Hurricane Katrina – whose five-year anniversary just passed – as much as it does with North Philadelphia.

Thompson and Chissolm are members of the Village of Arts & Humanities, an arts organization and after-school program that completed a dozen art parks throughout North Philadelphia. 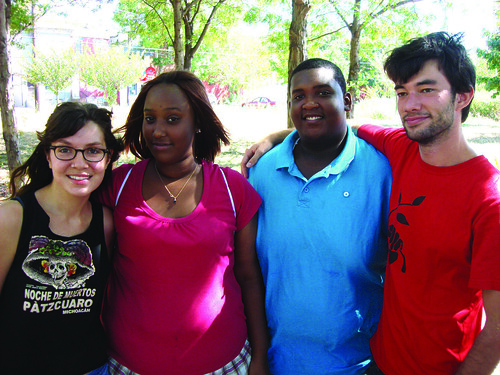 The three met last spring when Epstein approached the Village of Arts & Humanities looking for high school students to participate in a service trip to New Orleans. Epstein has been organizing these trips since 2008. He was still in high school when he and five friends started nonprofit organization New York 2 New Orleans.

“You know, through this, we might be able to get some youth people, like little young ones to follow in our footsteps, so they won’t be out on the streets all the time,” Thompson said. “I lost my friend that was on my block. He was on the streets, and I just lost him yesterday.”

The team first learned about community gardening while volunteering with Our School at Blair Grocery, a hands-on educational farm and model for communal sustainability.

Our School at Blair Grocery and Epstein’s Philadelphia Urban Creators were both recently featured in a Time magazine article about urban farming in the Lower 9th Ward. Together, the groups represent some good to be found in the tragedy of Hurricane Katrina, five years after the storm ripped through New Orleans.

The Philadelphia Urban Creators are focusing on creating a youth-led movement that will teach people how to help themselves.

“I choose to help, or rather, assist. Helping is just proving that you’re better than that person, but if you assist, it’s more like cooperating with that person,” Thompson said.

“I think that’s the difference. There are plenty of people that do farming work, but from what I’ve seen, far too many of those groups are not made up of people from the neighborhood that they are in,” Epstein said. “They have resources and great ideas and find land, and they grow stuff, and that’s great. But I think that we’re talking about doing something that’s deeper, more long-term.

“If this community is really doing this for itself, then it addresses all of the issues of land vacancy, food, employment, self-sustainability – everything,” he added. “It’s just really empowering.”

Epstein, Thompson and Chissolm plan to launch an outreach campaign as they prepare compost this winter. The compost will be ready to plant in the spring, they said.

In the meantime, they are taking small steps. Epstein said he is excited that Thompson’s position as café manager for the Village of Arts & Humanities means they can share the office.

“That way we’re a little more official,” Epstein said. “Maybe have a filing cabinet or something.”

Greg Trainor can be reached at greg.trainor@temple.edu.
Correction: In an editing error, The Temple News incorrectly quoted Alex Epstein as saying “You know, through this, we might be able to get some youth people, like little young ones to follow in our footsteps, so they won’t be out on the streets all the time. I lost my friend that was on my block. He was on the streets, and I just lost him yesterday.”  The quote should have been attributed to Denzel Thompson.

Where are they now?

This weekend marks the beginning of the National Football League’s regular season, so The Temple News looked into what has become of the football team’s six former players from last year’s senior class who signed

The Owls won their first road game of the season, 5-2, against UConn on Friday in Storrs, Connecticut.

The Owls had a season-high 64 digs on Sunday in their win against the Tigers at McGonigle Hall.