The intersection at Fourth and South streets was once a haven for independent record stores. From dance DJs at 611 Records to the heavy metal gurus at Relapse Records, all genres of music were satisfied in a one-stop trip to the area.

With downloadable music and the iPod revolution sweeping the nation, it’s a wonder how independent record stores continue to stay in business.

The sad fact is they aren’t.

Very few record stores have managed to keep their doors open on South Street. In 2006, Spaceboy Music and Tower Records closed their doors due to online competition.

When owners of Spaceboy Music decided to close, they detailed their reasons for doing so in a blog post on Philly Shreds.

Since then, the shutdowns kept coming.

During the past year, both Relapse Records and 611 Records fell into South Street’s black hole for independent record stores.

Some feel the future isn’t so bleak for all record store owners.

“I’m not so much against chain stores,” she said. “While I prefer shopping at locally owned stores, the chain stores bring in curious, new people to the South Street area.”

South Street has always attracted patrons from eclectic backgrounds. It was once home to forgotten artists and immigrant-owned businesses. Now, it is one of Philadelphia’s main tourist attractions. 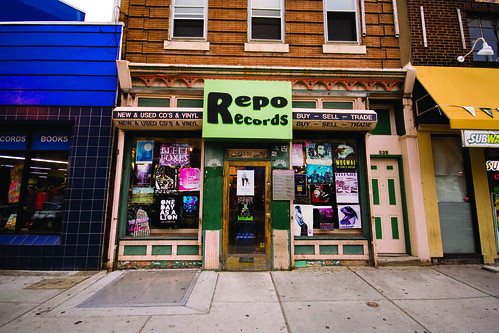 No matter whose territory it is, the scene on the infamous street continues to serve those looking for alternative retailers.

This is what attracted Jack Fritz, one of the longest standing independent record store owners at Fourth and South streets.

Since the early 1990s, his shop Noise Pollution has offered music lovers rare bands and even rarer vinyl.
But times are changing.

While other small businesses can sell products that are unique, record businesses are suffering because music is easily accessible online.

“It’s hard because the economy and the music and CD business is sh–,” Fritz said. “We all got hit hard with downloading and the like. It’s not like owning a donut shop. You can’t download donuts.”

According to the Wall Street Journal, piracy has caused CD sales to decrease by 20 percent in 2007. Many businesses have begun to reduce their CD inventory because sales are declining.

If a multi-million dollar music empire has trouble staying in business, how exactly does an independent store stay afloat?

Small business owners are confident about the environment on South Street.
Crystal reaps the benefits from tourists who visit Philly.

“I would love to see regulars and locals shopping in my store, but tourists are great clientele too,” she said. “They bring something new to the city.”

The rarity factor is definitely an asset for Fritz, but it’s a waning selling point.

The problem today is “rarity” is easier to come by. At a time before eBay, products like local punk CDs were harder to find and drew endless crowds. Now, people have the convenience of being a click away from their favorite tunes.

Naturally, the local music guy suffers a little, but the future of the business isn’t all that gloomy.
“Vinyl is selling big,” Fritz said. “It’s like kids found their parents’ old turntables and [said] ‘Hey, a new toy that works.’”

It’s no wonder Fritz is successful.

If it weren’t for Fritz’s business savvy, his store would not be open.

He stopped buying from wholesalers, and even has a “secret spot” from which he purchases new material.

Undeniably, there are a lot of challenges facing Fritz, but six days a week he opens his doors to the city, inviting all to listen.

For all his successes, Fritz is realistic about his business.

“In 1991, I was walking out of here with wads of cash. It’s definitely slowing down,” he said. “But I’m doing OK for myself. I just wish everyone was doing just as good.”

Lauren Gordon can be reached at lauren.gordon@temple.edu.