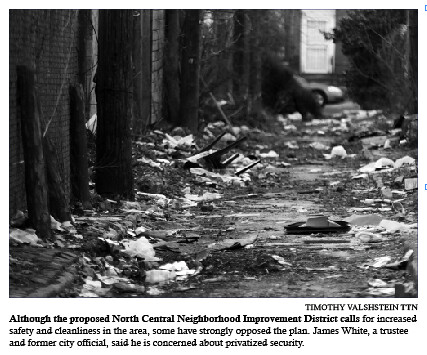 As the improvement district pends, some at Temple have spoken out against it.

The North Central Neighborhood Improvement District proposed for the area surrounding Main Campus is supported by Temple, but is not without its fair share of dissenters.

One of the most outspoken residents against the improvement district is Vivian VanStory who is the president and founder of the Community Land Trust Corporation, a nonprofit organization in North Philadelphia.

While VanStory and her organization oppose the NCNID, William Bergman, vice president and chief of staff at Temple, is listed as a board member of the CLTC.

VanStory said when she was gathering support for the organization, she approached Bergman, who said that he’d like to be part of it.

Ray Betzner, assistant vice president of university communications, said after a conversation with Bergman that he is not part of the board, which VanStory refutes.

Bergman has not responded to multiple requests for an interview by The Temple News.

Although confusion has risen from Bergman’s position with the CLTC, other people affiliated with Temple have come out against the NCNID.

James White, trustee and former executive vice president, testified against the bill at a city council hearing on March 13.

White, the former managing director of Philadelphia, listed numerous reasons for his opposition to the bill, including the supposed improvement of security in the neighborhood, which is allotted $75,000 of the district’s $450,000 initial budget, according to the bill.

“There has been absolutely no justification for the establishment of this neighborhood improvement district to improve security within the [district],” White told The Temple News. “The question that I would raise is: Who is going to provide that additional security that comes out of the nonprofit corporation that is established by this bill? Who is going to supplement the Philadelphia Police Department? And the answer to that is no one.”

White, who added he was not speaking on behalf of Temple, said that revenue accumulated to fund the district would not be sufficient to add additional police patrols to the area and said he did not approve of privatizing security in the district.

While White listed security as a main source of his opposition to the NCNID, he also said that relations between Temple and the community have been damaged as a result of the NCNID.

White said at the March 13 council hearing that the process has been difficult for those on both sides of the issue.

“This unforunate situation is not in the best interest, I feel, of any of the parties to this dispute over the proposed establishment of a neighborhood improvement dsitrict in this area,” White said in his testimony. “The resolution of this dispute is one of the most critical challenges, I feel, facing all of us who care dearly about the people who live, work, study, have businesses or visit this neighborhood.”

The bill faces one more public hearing on May 3, at 1 p.m., before a 45-day period in which the bill can be voted down by a negative vote of 51 percent of affected property owners.

Betzner said Temple still supports the bill and is expected to make a significant contribution to the district, though it has not been announced.

VanStory added that she still continues to gather petitions opposing the bill in order to garner the necessary votes to stop the legislation.

“Even though they’re not taxing the residents [the community] is suspicious about what’s going on here,” VanStory said. “The people are alerted here in the community and they’re really up in arms about it.”

Sean Carlin can be reached at sean.carlin@temple.edu.

A District in Dissent

Improvement plans have divided residents and property owners pushing the bill. It’s a familiar sight: A group of developers and a pastor sit in a room on North Sydenham Street, talking about their investment in

Council President Darrell Clarke spoke to long-term residents concerned with his neighborhood improvement district plans. A week before the first hearing on the North Central Neighborhood Improvement District is to be held, community members came