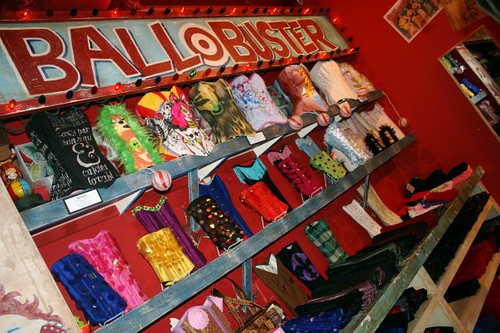 First things first: yes, the Market-Frankford Line does go past Second Street. It stops at Spring Garden and Girard, and both stations are within walking distance of the suburb-turned-Philadelphia neighborhood Northern Liberties, a hip hodge-podge of shops, restaurants, bars and art galleries that’s become a destination of choice for tourists and locals alike. Below, some of the former red-light district’s highlights:

On the sparse white walls of Amble Gallery & Books, colorful ’zines are displayed on shelves, lists like “Twenty Ways to Illuminate the Small Town Found on the Small Hill Across From the Street” are painted in brilliant watercolor, a giant sketch of a shaggy-headed hipster stares down at his cell phone and framed ink drawings form a checkerboard of ideas.

The store, which opened its doors this past October, sells art, T-shirts, books and ’zines with a common theme: quirkiness. Michael Perry’s Hand Job is 256 pages devoted to typography. A series of books called Labels Unlimited tell the stories of the world’s most groundbreaking record labels – many of which are miles beneath the public radar. And, sitting on a bookshelf near the front of the store, small wooden blocks are painted with the things we think but never say – like “MY PROBLEMS ARE INTERESTING.” It’s a narcissistic quirkiness.

The gallery end of Amble, meanwhile, feels like a First Friday refugee – the paintings and drawings on display would seem at home in any of Old City’s Second Street stops. There’s a reason why owner Concetta Barbera chose to bring Amble to Northern Liberties, though – and cheaper rent prices are only part of it.

“It’s an up-and-coming area,” she said. “When we opened, we were trying to get ahead of the game. We’re predicting that most of Old City is going to move up here eventually.”

Delicious
1040 N. American St., #901
This corsetrie and boutique is a circus – literally. Painted and decorated to look like the inside of the big top, with red and white stripes, sideshow freaks and distorted mirrors galore, Delicious sells everything from Western-style gun holsters to studded punk gear, with a whole lot of corsets in between.

The corsets are as sexy as they are tiny, and each one is different from the next. Displayed on shelves beneath a large sign that reads “Ball-Buster,” they look like a can-can line of bodiless Moulin Rouge! seductresses, dripping with sequins, feathers, glitter, spray paint and lace. These are no Hot Topic corsets – and, in fact, they’re handmade in the basement of the store by owners Psydde Delicious and Amy McConnell, who’ve been working together for 13 years and opened Delicious in 2005.

The clothing and accessories that Delicious sells are entirely unique to the store. Customers won’t find their cowboy boots, embroidered T-shirts, hoodies, suit jackets or Cleavage Cupcake bra inserts anywhere else in Philadelphia.

“Psydde is very, very careful about what he brings in,” employee Courtney Alston said. “He only brings in a couple of each piece, and they’re all specialty pieces, all handmade. He’s very careful to make sure that nobody else in the city sells these designs. The closest place to get any of this stuff is New York City.”

Conspiracy Showroom
910 N. Second St.
Conspiracy Showroom is the best place to get naked in Northern Liberties, according to Philadelphia’s CityPaper, at least. Its dressing room is an infamous one – the walls are lined with dress-making patterns, sparkling Christmas ornaments hang by ribbon from the ceiling and an antique chair and Oriental rug add a touch of Manhattan debutante class. Not that the store needed any more of that.
Chic, patterned dresses, charming high heels and charm jewelry are among the pickings at Conspiracy, a cozy shop that’s both rococo and down-to-earth, decorated with painted records, photographs of the Philly skyline, a red and gold Louis XV stool and, of course, a haul of fashionable booty.

The conspiracy began in 2006, when co-owners Typhaney Shanker, Rachel Breeden and Suzie Morris met in a Philadelphia antiques market, selling handmade goods. Bonded by a shared passion for well-made, very feminine clothing and accessories, they opened Conspiracy Showroom and began selling their own products – and those of other local designers – in the store. Cheeky jewelry-makers Brookadelphia dangle necklaces there, racks are stocked with ’50s-style Planet Rak cocktail dresses and The Farmer’s Daughter won’t sell its kitschy bikinis anyplace else.

With good reason. Shanker and Co. love the Northern Liberties neighborhood – and the neighborhood loves them right back. Conspiracy is one of the most popular boutiques in the area, just a lane away from North Bowl and one pin away from a Philly fashion strike.

1 Shot Coffee
1040 N. Second St.
1 Shot Coffee is a hang-out more than anything else, the kind of place where a customer could sit for hours, sipping coffee and basking in the dim lamplight with a book or playing a game of chess with a friend. Its walls are half-mosaic, half-vibrant red and its crushed velvet couches are worn from years of use. Everything about the place screams “comfort” – or, rather, whispers “comfort” over the din of indie rock and conversation.

Their coffee is a Columbian-based house blend made by owner Melissa Baruno herself, and their bagels, muffins, croissants and other pastries come from local Northern Liberties bakeries. The shop has the same low-key attitude as other stores and cafés in the area, and those who live within NoLibs boundaries use it as a meeting place and work space, often setting up camp with laptops and take-out meals from other eateries.

“There are a lot of regulars who come in,” barista Dexter said. “It feels like everybody knows each other.”

Northern Liberties’ Area 919 will be a permanent artist’s residency.

A restaurant doesn’t need rarities or refinements in order to be successful. Ms. Tootsie’s Soul Food Café may not wow you with foreign ingredients or the artistry of its presentation, but it has a knack