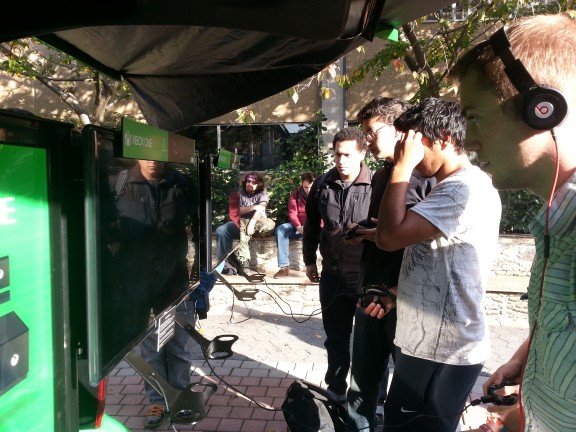 The Xbox One won’t be hitting store shelves until Nov. 22, but students and visitors alike had an opportunity to try out the new video game console on Oct. 28, just under a month prior to its release.

As part of a nationwide tour, Microsoft stopped at Liacouras Walk on Main Campus, bringing along a few Xbox Ones and three of the console’s featured launch titles in Turn 10 Studios’ Forza Motorsport 5, EA Sports’ FIFA 14 and Double Helix Games’ Killer Instinct.

The truck, which came equipped with six TVs to allow for each game to have two setups, drew a crowd throughout the day. Some students expressed their excitement about the gaming opportunity.

“It’s awesome, because it brings everyone together,” freshman business and management Donovan Fraser said.  “I think it looks great, the graphics look pretty sick, but I just enjoy having a really cool experience with a bunch of people I don’t even know.”

EA Sports’ popular soccer game was one of the most popular games available for students.

“I have just been talking a lot of smack,” Fraser said. “I got to meet a lot of new friends, a lot of people. I’m having a great time right now.”

Fraser commented that the games now seem highly realistic, which was affirmed by other students.

“It’s a lot shinier,” sophomore marketing major Brad Stiles said. “It looks, to me just watching it, a lot faster.”

While many were fixated on FIFA, Killer Instinct also attracted a lot of attention.The fighting game series originally debuted on the Super Nintendo back in Nov. 1995, but has not been available for the past 17 years.The newest installment has online multiplayer and high-definition graphics.

Some couldn’t help but feel nostalgic while playing.

“I think Killer Instinct caught my eye the most,” Frank Fantazzi, a resident of South Philadelphia, said. “I used to play in the late 90s when I was young. I loved it, it was always kind of like a Mortal Kombat type of game and you can’t go wrong with that.”

“It’s one game that I haven’t seen since Super Nintendo,” sophomore finance major Michael Torres said. “Seeing it right now really got me excited.  The first time I played it I was eight years old, so seeing it now brings back memories from back in the day and seeing how far the consoles have come is just awesome.”

Forza 5 didn’t have as long a wait as the other two games due to the one-lap nature of the game. Vibrations gave feedback whenever the car shifted gears or made sharp turns.

“It’s different,” Daniel Troupe, a junior in the Tyler School of Art, said as he was giving the game a test run. “I’m feeling [the trigger vibrations] independently, which is different because usually they’re all in the hand grip.”

Some students like Damiean Winns were already aware of the Xbox One tour’s stop on Main Campus. The senior hospitality management major at Widener University already has an Xbox One pre-ordered.

“I went to the first one when they had it at Skybox events a couple weeks ago and then I went to the website Xbox.com/OneTour and it said there was going to be one at Temple,” Winns said. “So I called my friends up. They couldn’t make the first one, and I said ‘lets go up to Temple and lets play it,’ so we all came up and enjoyed ourselves.”

For others, the stop was a surprise.

“I thought ‘what is going on here? Are they really setting up an Xbox for people to play?’” Torres said. “It’s crazy because it hasn’t even come out yet, so seeing this was surprising to me. It’s really cool because I get to play before other people can.”

Native Brazilians love soccer, but will foot the bill for the World Cup.

Online game ‘Among Us’ brings Temple students together

Students play the deceptive game on Discord to meet others and discuss current events.