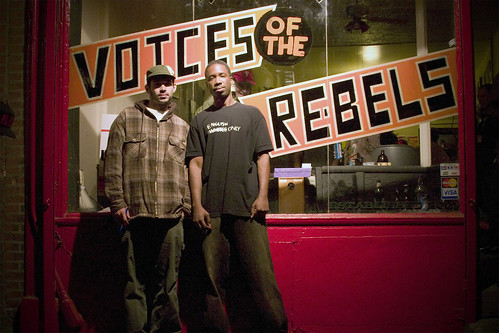 Students, labor activists and artists filled a South Philadelphia art studio Friday night for “Voices of the Rebels,” as part of Student Labor Action Week, a week of protests and flier dissemination that will start in earnest on Monday.

Temple Student Labor Action Project and Jobs with Justice will continue their ongoing fight for improving the conditions of AlliedBarton by distributing informational material throughout the week.

Caresh Walker, who runs SoulPurl with fellow artist Peter Javian, offered the space to the SLAP at the price of a night’s electricity bill and told them that they are welcome back whenever they like.

This week, students on campus will be offered fliers and handouts by SLAP on the conditions of AlliedBarton workers and other employees of Temple.

On Tuesday, SLAP and JWJ will support the protest of Temple’s professional and technical union, the American Federation of State, County and Municipal Employees local 1723, which is stalled in its negotiations for a new contract with the university. Temple is trying to institute a merit-based pay system, which would link pay raises to performance.

The week’s capstone event will be on Sunday, when activists and AlliedBarton workers will commemorate the assassination of Dr. Martin Luther King, Jr. and the birth of Caesar Chavez by marching from Arch Street Methodist Church to a currently undecided location. Organizers are considering marching to either the Kimmel Center, where a theater is named after AlliedBarton’s biggest shareholder, Ron Perelman, or AlliedBarton’s headquarters.

Organizers say that targeting Perelman will inextricably attach his name to the conditions of workers for the first time.

In his day job as an event coordinator for the University of Pennsylvania School of Medicine, Walker frequently comes in contact with AlliedBarton guards.
“I know what they’re going through, and hearing about it sends a chill up my spine,” Walker said.

Jacob Winterstein, a senior geography and urban studies major, performed spoken-word poetry while Philadelphia artist Zack Dean stood next to him, furiously scrawling an image of queued marchers onto a canvas.

“The service economy is the dominant economy is this city, so it’s the most important to unionize,” Winterstein said. “As a Temple student, it’s imperative that I support workers at Temple.”

SLAP and JWJ have tried to unionize AlliedBarton workers since October 2004. Their most recent campaign began in September last year and focused on winning the workers five paid sick days.

Workers instead received a benefit of one sick day per year of full-time employment with a maximum of three sick days, which Fabricio Rodriguez, president of JWJ, called “a PR stunt.”
“They acted like they were cutting us a break, and it was a PR stunt,” said Rodriguez. “We will get everything we want because we are on the side of the angels.”

Andrew Thompson can be reached at andrew.thompson@temple.edu.

Working boring nights in Anderson Hall has shown me there are still community outreach programs that are actually successful. Like clockwork, the lobby of the building transforms into a bustling marketplace of kinship each night.

Rappers, dancers and other artists came together to celebrate hip-hop culture and music.