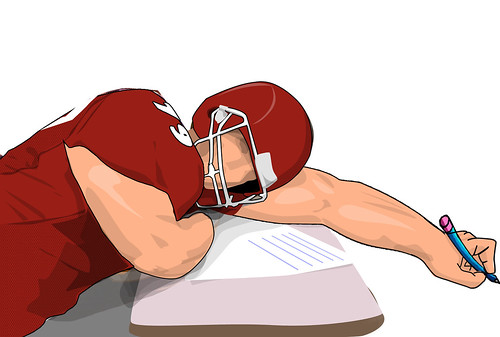 Student-athletes at Temple are busy people. Not only must they focus a huge portion of their out-of-class lives on practicing their sport, but they have to balance a full-time academic schedule on top of it. And it’s not easy.

Although Temple only requires that student-athletes enter school with the NCAA standard GPA of 2.0 to compete on a sports team their first year, it is optional for coaches to raise the bar for their own athletes to keep them in check academically. While some coaches simply demand a certain GPA, others require a study hall in addition. In some cases, it’s a requirement for students to sit in the front of every one of their classes, with their eligibility to practice in jeopardy if they don’t.

Temple’s decision to accept students based on solely the NCAA standards was well-thought-out. Because the specific combination of high school GPA and SAT scores makes the acceptance process into Division I sports fair, it seems as though academics should be off of a coach’s mind by the time they begin playing on the team – but for the majority, they aren’t.

“We encourage our student-athletes to maintain a 3.0 GPA,” said head coach of Temple’s golf team Brian Quinn. “For every .10 below 3.0, they must perform 10 hours of community service.”

Unlike Quinn, most athletic coaches at Temple have a suggested GPA or goal, rather than a requirement. This is because most student-athletes have no problem with grades. Pete D’Alonzo, Assistant Director of Athletics, holds an optimistic spirit about Temple’s athletes.

“About half of the teams have a 3.0, and they’re getting better,” D’Alonzo said.

Temple hired D’Alonzo after the athletic department failed to meet the NCAA’s required Academic Progress Rate in 2006. He explained that if a student-athlete is struggling with school, regardless of difficulty, it isn’t as hard as it seems to succeed academically.

“The two most fundamental things are to get them to go to class and to get them to study,” said D’Alonzo, who had the same job at Notre Dame for 10 years before beginning work at Temple. “Admissions won’t accept anyone who can’t be successful. If students are capable and committed, they’ll graduate.”

Jordan Wadley, a junior advertising major who played on Temple’s football team for three years, never encountered one academic problem throughout his time on the team.
“This past semester, I had a 3.25 GPA, and last spring it was a 3.4,” Wadley said.

Wadley, who had to leave the football team early this semester because of bad knees, joined in the spring of 2005, his freshman year, and experienced a busy schedule the whole time.
“We had to sacrifice a lot of free time,” Wadley said. “When we did have it, we had work. It was hard, but you just have to manage your time wisely.”

For the football team, Wadley explained that the coach had high expectations for his athletes.

“He wanted us to get a 3.0,” he said. “He always said ‘B’s or better. We were required to go to every single class and sit in the front two rows.”
Luckily for Wadley, he never had to seek academic tutoring despite his physically and mentally stressful weekdays.

“During football season, we practiced every day, but we had Sundays off,” Wadley said. “I’d usually get back around six or seven, after I ate.”

Unlike the football team’s situation, some athletic coaches don’t raise the bar for their students simply because they don’t have to. Fred Turoff, the head coach of the men’s gymnastics team, is proud to have a team GPA of 3.2 as of fall 2007.

“Since I seldom have a low-GPA student to deal with, I never made a minimum GPA requirement,” Turoff said. “I stand behind our academic support office in that if a student-athlete, who is required to attend study hall, misses several times, he stays out of practice until he has satisfied the hours-of-attendance requirement.”

Amanda Janney, head coach of the field hockey team, also prides in exceptional students – field hockey currently has the highest team GPA at Temple as well as three honors students. However, Janney has set standards to make sure it stays that way.

“We have a variety of academic requirements of our student-athletes including meeting with their academic coordinators and academic advisors,” Janney said. “They also have to meet with their major’s academic advisors. Additionally, we have our freshmen participate in mandatory study hall.”

Most students who meet Temple’s athletes probably often think about their skills in sports and performance in games, but don’t consider the amount of time they spend working to excel in both that and school. With such a packed schedule, student-athletes sacrifice almost all of their spare time to work on these two things.

“The student-athletes’ ability to manage their time and stay dedicated to their team and diligent with their school work is a difficult task,” Janney said. “We are very proud of what our student-athletes are able to accomplish as they grow throughout their athletic and academic careers. They are excellent role models and positive public figures for increasing the awareness of the great things going on at Temple.”

Because of confusion about the upcoming Senate, Temple Student Government has postponed their upcoming elections. The election dates were moved from April 8 and 9 to April 22 and 23. TSG executives said they hoped

The latter building fell just a few weeks ago, on March 6. The contractors have cleaned up the debris, but the chain-link fencing is still there.