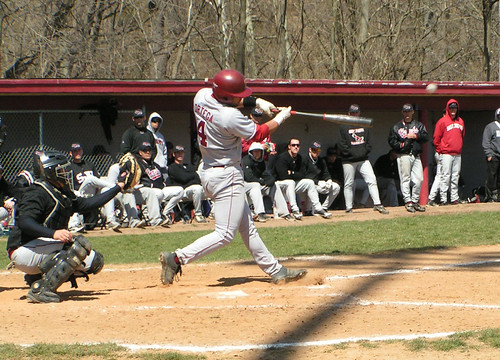 Shortstop Mark Ortega didn’t know what it was like to recover from a hitting slump. Not at the collegiate level.

Instead, he was struggling to see time on the field while at Boston College in 2006 and 2007.

Last season, the 6-foot-2, Florida native hit 3 for 10 in only seven games played as an Eagle.

After arriving at Temple, Ortega matched those three hits in the Owls’ second game of the season, going 3-for -5 in a win over Bethune-Cookman on Feb. 24. By the end of the three-game set, Ortega had already posted five hits and was batting .385.

Through Sunday, Ortega is batting .313 after 22 games and 80 at bats, the highest average of any Owl who has started in 20 contests or more this season. He is tied for the team lead in home runs with three dingers and is second on the squad in RBIs with 16.

“It’s been a change,” the junior said Friday after the Owls defeated host Saint Joseph’s, 13-2, at Latshaw-McCarthy Field in Norristown. “It’s been fun being an everyday player, being in a lineup that scores so much.

“I just wanted to play and it was just a good fit,” he said, explaining why he chose to transfer to Temple. “I came here and liked it and liked [coach Rob Valli], so it worked out good.”
It has also worked out well for Ortega’s partner in the middle infield, junior second baseman Carmen Del Mastro, who was batting .306 through Sunday.

“Me and him, we’re real close on and off the field,” Del Mastro said about his relationship with Ortega. “It makes it a lot easier, and we get to know each other a lot better.”

“I think it’s a good combination,” Valli said about the duo. “With [Ortega and Del Mastro], and then you can expand that to our entire team, they work real hard in every aspect of the game. Every time they’re together, they’re being asked to work 100 percent, and they give every bit of that every time.”

It hasn’t been perfect for Ortega, though.

After a 2-for-5 game at Rhode Island’s Bill Beck Field on March 21, Ortega fell into a cold streak, reaching base on a hit only once in 23 at bats through Saturday, and his batting average dropped to .289.

But with the Owls’ offensive outburst so far this season – before a loss to Monmouth on March 26, Temple had scored at least eight runs in 14 of their first 18 games – the team managed to work around the struggles of its shortstop.

While Ortega was hitless in three at-bats Friday, Temple sent home 13 runs, the most the club has knocked in since May 2007.

The Owls’ strong pitching continued Saturday, but Saint Joseph’s scored three runs on four Temple errors and the Hawks shutdown the Owls, 3-0, as Ortega continued his slump with a 0-for-4 showing.

In Sunday’s series finale, Ortega showed signs of breaking out of his cold spell. He went 3-for-4, including an RBI double in the sixth inning, and the Owls won, 9-6.

“I wasn’t really seeing the ball like I was at the beginning of the year,” Ortega said. “But I’m feeling better. I’m getting back into it. Hopefully [I’ll] get that batting average back up.”

The Owls won the bookend games of a three-game set against St. Joe’s this weekend.

Temple punished St. Joe’s to the tune of 13-2 in the series opener Friday at Latshaw-McCarthy Field.

Four of the 13 runs came from one swing of the bat by Sean Barksdale. The junior blasted a grand slam with two outs in the seventh inning.

In a game where Temple (13-9, 5-1 in the Atlantic Ten Conference) lost ace Tom Dolan in the second inning due to tightness in his arm, Valli expected every run to matter. But relief
pitcher Ben White had more than he needed when he entered the game in the fourth.

The freshman pitched six shutout innings, giving up only four hits, while striking out a career-high 11.

White appeared to be in trouble in the fifth and sixth innings after Saint Joseph’s loaded the bases in both, but the 6-foot-2 pitcher worked out of trouble, ending each jam with a punch out.

He cruised from there. No Hawk managed to get on base in the last three innings.

“I’ve been a guy that it takes me a few innings to get going,” White said. “I’m glad coach Valli and coach [Joe] Thomas had a lot of faith in me and kept me in there, because I think I get
stronger as I go on.”

“I think we saw, or we had to assume, in those early to middle innings, that Tommy Dolan came out, and I think the hitters kind of knew ‘Hey alright, our number one’s out, we need to hit a little bit here to win’, and we did that,” Valli said. “Then low and behold, our bullpen ends up coming in and just giving up two runs, which was a great job.”

The Owls spoiled a solid outing by junior Matt Mongiardini by committing five errors in a 3-0 loss to the Hawks Saturday. Mongiardini allowed no earned runs in six and a third innings of work.

Temple recovered in the series-closer Sunday with a 9-6 victory as freshman outfielder Byron McKoy notched four hits in the game.