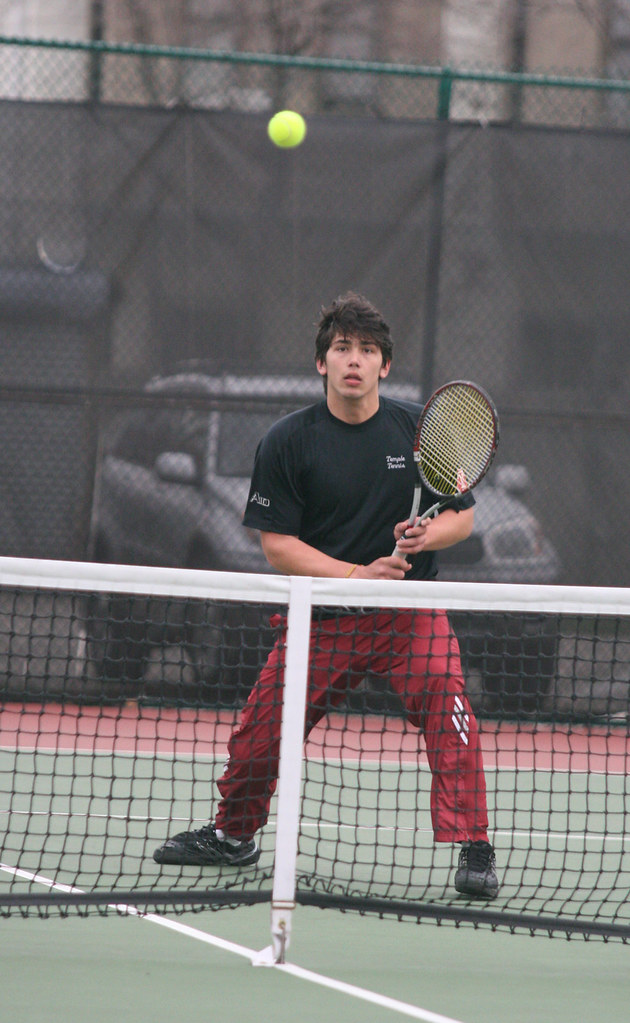 During its last match, night already falling, the fate of the men’s tennis team had already been decided as the Owls were about to lose their fifth straight contest on a chilly Friday.
However, that didn’t stop the squad from gathering around and cheering on junior Eduardo Saavedra as he won his singles match, 10-8, on a third set tie-break.

Despite Saavedra’s efforts, the Owls (5-12 overall) were downed, 5-2, by the Xavier Musketeers, but recovered Sunday to beat Fordham, 7-0, at the Pavilion to snap their losing streak. The team will play its season-ending match against host Villanova today at 2:30 p.m.

Before the Owls beat Fordham, the squad hadn’t won since a 6-0 victory over St. Peter’s on Feb. 23 – more than a month without a win.

“I think that next season will be a lot better,” junior Ricardo Velazquez said. “We played some tough teams this season, but we continued to fight hard no matter how we were feeling that day.”

Senior co-captain Zach Tobias said the Owls’ record doesn’t correlate with how hard the team has been working, calling the season a “success.”

Against the Musketeers, Tobias was the only other Owl besides Saavedra to pull out a win. He defeated Brian Schubert, 6-3, 6-2, in his singles match on Senior Day, where beforehand, he received a plaque commemorating his time and success on the team.

With the win, Tobias improved to 33-22 in single matches during his career.

“It has been a great day,” Tobias said. “I had no idea coach would present the plaque and everything, it was a great day near the end of a great
experience.”

Tobias is the only senior on a squad lacking experience.

Furthermore, one of the factors the Owls have had to deal with this season is their six-man rotation, the minimum number, instead of a more common eight to 10 players. This has been due to injuries as well as players who were red-shirted.

The Owls aren’t using that as an excuse, though, but rather an opportunity to grow both as individuals and as a team for the future.

Coach Steve Mauro said playing tough teams like William & Mary, Binghamton and conference foe Xavier this season, along with being on the road so much has contributed to the team’s losing record. Eight of the Owls’ first 12 regular season matches were played away from Philadelphia.

In a reversal of their start, the Owls’ final eight regular season matches were held in Philadelphia with the last match taking place at Villanova.

Mauro and the rest of the Owls said they were looking to finish strong and pick up some wins in their last couple of matches of the season. The Philadelphia-filled closing schedule was something the team hoped they could use to their advantage.

“I think we are pretty well prepared for these remaining matches, and I think we should do pretty good,” Velazquez said. “We just have to end the season on a good note.”

Kevin Smiley can be reached at kevin.smiley@temple.edu.

Nostalgia and pop culture given a twist

The lone senior on the men’s tennis team suffered a season-ending injury over fall break.

The Owls will return all of their players from 2013.