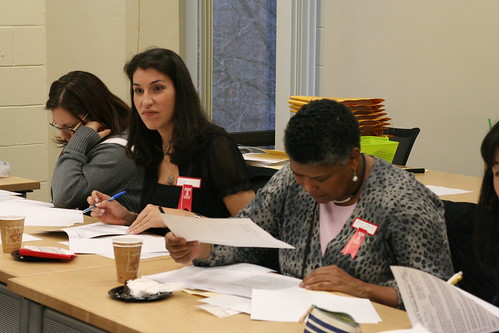 As the brain trust behind Temple’s new Pennsylvania Governor’s School for Urban Teaching met Friday to review student applications, they needed to look no further than the Temple graduate assistant distributing the forms to see the ideal Governor’s School model.

It was Josephine Gasieuski, 1997 alum of the Pennsylvania Governor’s School for the Sciences at Carnegie Mellon University. As a high school junior in the sciences program, she wasn’t sure what she wanted to pursue. Now she’s close to obtaining her doctoral degree in urban education.

She’ll lend some of her insight this summer when Temple hosts the PGSUT, a five-week, full-scholarship residential program for 30 to 35 high school juniors from across the state.
Gasieuski assisted the group of education professors, community-based organizers, and the Philadelphia School District officials that convened Friday at Ritter Hall to provide input on the more than 100 applications received.

The PGSUT will be based largely on the Governor’s School for Teaching at Millersville University, but will be specially designed to meet the needs of diverse students and motivate them to consider careers in urban education.

“There’s an added interest that these students come from urban communities because they’ll be better able to understand the students,” said Heidi Ramirez, director of the Urban Education Collaborative, a research group housed within the College of Education.

Ramirez, whose team at the UEC will be running the program with faculty and staff from the College of Education, noted that in the Philadelphia School District, 85 percent of the students are of color, while only 38 percent of teachers are of color.

Education Dean C. Kent McGuire called the shortage of minority teachers a “statewide phenomenon” that is “especially acute in the state’s urban centers.”

“If there was somewhat more diversity, it would provide more effective role models for students,” McGuire said. “Recent research, as well, indicates that it helps to enhance minority schools.”

The PGSUT has been designed to respond to this problem.

“A longer-term goal would be to have some of the students find gainful employment in education,” McGuire said. “Especially in the city where there’s a need for teachers with a passion to help these children.”

But McGuire added that the problem “didn’t happen overnight, and it won’t be solved overnight.”

Pennsylvania State Rep. James Roebuck, D-Phila., was the one who got the idea off the ground. After observing Millersville’s “Kid’s College,” he approached McGuire with the idea of a separate school focused on urban teaching.

Roebuck, chair of the House Education Committee, worked closely with Temple in the past on teacher’s certifications on the State Board of Education and was able to secure $350,000 in state funding for the project.

Roebuck said he hopes it will not only “put in support so that students can really consider teaching,” but also dispel any myths that Pennsylvania students may have about Philadelphia.
“It’s not Babylon on the Delaware River,” Roebuck said. “It really is a great city and a great place to work and live.”

Wanda Brooks, an elementary education professor who is helping to design the curriculum, said the program plans to have the students learn about teaching through afternoon courses four days a week. They will then put those skills into action by teaching third- through sixth-grade students under the guidance of other teachers at an undetermined school near Temple each morning.

Ramirez said they are also currently looking to recruit interested undergraduate students to help with the program as summer counselors.

The urban twist will be getting the “Govies,” as they call themselves, involved in community service and immersed in Philadelphia’s neighborhoods through field trips, guest speakers and “enrichment activities.”

“What we want is also to get them to get a feel for what urban areas can offer,” Brooks said.

If this year’s pilot program goes well, the College of Education will look to double their applicants to more than 60.

“The idea is to be in this for the long-term to see these [reforms] happen,” McGuire said.

Temple’s PGSUT will be the state’s ninth Governor’s School, joining a legacy dating back to the early 1970s. The schools deal with various subjects and are all run by a Pennsylvania university, which follow the same structural format.

The PGSUT has lent much from Millersville’s “Kid’s College,” which has been thriving since 1990. Carol Welsh, “Kiddie College” director since 2001, said it has been rewarding, and sometimes humorous, to see students grapple with the joys and frequent difficulties of teaching.

“Even if the outcome is, ‘I really don’t want to do this,’ that’s fine, too,” Welsh said. “But now that we have these programs, they can figure it out on their own.”

Nick Pipitone can be reached at nick.pipitone@temple.edu.

Comedian Joe Rogan uses his wit like a knife

Joe Rogan is a stand-up comedian whose list of achievements is a long one. In addition to his stand-up work, he has hosted the The Man Show and commentated cageside as mixed martial artists punch,

Recipe for the Food Network’s success

It’s where I go if I want to grab a midnight snack, ‘unwrap’ some secrets, or practice my Southern accent. Personality trumps experience on the Food Network.

Sen. Hillary Clinton, D-N.Y. held a rally at Temple in McGonigle Hall during Spring Break. Some think it a staged act that speaks to her broader campaign.