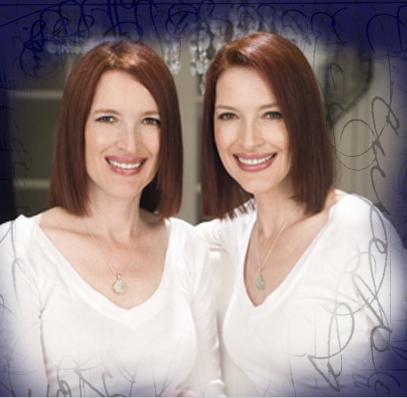 When most people think of psychics, they envision a Miss Cleo lookalike – with a gypsy headscarf, tacky jewelry and crystal ball – seated in a shady backroom of a shop on the boardwalk looking to con people out of money.

Temple alumnae Terry and Linda Jamison defy this stereotype just as they defy scientific law. The Jamison sisters not only claim to be the world’s only psychic twins, but their decade of accurate predictions has earned them the reputation to back it up.

“We’re considered the most documented psychics in the world,” Terry said.

Aside from doing frequent radio interviews and being featured in several articles, they’ve appeared on 60 TV shows and 12 documentaries worldwide. With this exposure, people from all over have come to the psychic duo seeking guidance.

Growing up in West Chester, the Jamison sisters knew ratherearly that they shared a unique bond. They were born 28 minutes apart, but share two special gifts: identical DNA and extrasensory perception.

They started realizing the extent of their psychic abilities when they were 6 years old, after Terry accurately predicted the number of jellybeans in a jar at a school fair. Everyone wrote it off as just a good guess, and the twins played along because they were secretive about their abilities.

“Growing up in the ‘60s, nobody knew who a psychic was,” Linda said. “Even today, people act really strange around us.”

Although they continued to develop and open up about their psychic abilities, the twins spent their youth advancing their artistic abilities.

After graduating from Temple’s Tyler School of Art with degrees in fine art in the ‘70s, they started their own performing arts company, Pop Theatrics, in New York. Describing it as a “small circus,” their shows included comedy, dance, music and acrobatics.

They then decided it was time to take their dreams to Hollywood and spent 15 years as improvisational comics, doing stand-up routines all over the country and following in the footsteps of their childhood idols, Carol Burnett and Lucille Ball.

In 1989, they became the first twins to appear on Saturday Night Live in a short film the two made, playing Louise, the two-headed housewife. They even ended up doing a spin-off of the character for a yearlong VH1 mini-series.

“We thought it was our destiny to be comedians,” Linda said.

But while they had never stopped exploring their psychic power, it wasn’t until the ‘90s that they officially began pursuing it as a career, after being discovered for an NBC show about unexplained phenomenon called The Other Side.

Now in their 40s and still living in Los Angeles, they’ve appeared as professional psychics on numerous talk shows and popular series like the Real World, Trading Spaces and The Osbournes, where they were hired to do readings for the guests at Ozzy and Sharon’s vow-renewal party.

The twins use a process of “automatic writing” to channel their predictions, but it also comes to them very naturally.
“We can turn it off and on like a radio,” Linda said. “We can just tune in to anyone at any time.”

They’ve accurately produced many predictions, including John F. Kennedy, Jr. dying in a small plane, the U.S. invasion of Iraq, and George W. Bush winning both elections. For 2008, they see Hillary Clinton as his replacement. They’ve also sparked tabloid gold having predicted Angelina Jolie and Brad Pitt adopting another baby, the top five winners of the 2007 Oscars, and the breakup of “Bennifer.”

But their most publicized prediction came in 1999 on Art Bell’s radio show. While in separate rooms, Terry and Linda both wrote: “World Trade Center attacks by 2002, terrorist Bin Laden, Pentagon.”

Two years later – after the Sept. 11 attacks occurred as they predicted – the FBI shut down their Web site and any other sites featuring their prediction. Ironically, the statuesque sisters (measuring about 6-foot-2 in heels) had been nicknamed “Miss Twin Towers” in the early 80s when they did improvisation parties on the top floors of buildings.
Since the twins make such heavy predictions, they must also deal with cynics.

“Anything unknown, people are afraid of,” Linda said.

And they do acknowledge that there are a lot of frauds out there. But the only tricks the Jamison sisters play are with your eyes, particularly when they dress their identical bodies in matching attire.

Terry, who is typically the more reserved of the two, is rather passionate when defending their credibility. “Our prophecies are written in stone,” she said.
However, converting people into believers doesn’t seem to be too difficult for them. Some days their Web site, psychictwins.com, gets more than 1 million hits. Word of their gift has even spread beyond U.S. borders, earning them a big following in the United Kingdom and Australia.

“We’re almost like legends in parts of the world,” Linda said.

Some of their most interesting clientele has included a woman from Tibet who wanted to know if bird flu would hit the country, a vice president of Microsoft and a well-known filmmaker who wanted them to channel his next screenplay.

But despite being in such high demand, the twins limit their appointments because acting as “a reality check” for people can become very draining. The most common examples of questions are people wanting to know how long their marriages will last, if they’re going to become a famous actress and, of course, if they’re going to win the lottery.
“A lot of people live in a fantasy world,” Linda said. “As psychics, they want us to wave a wand. We can only be the compass.”

In some cases, this can be especially difficult. They scanned people’s bodies for illnesses that doctors couldn’t find and did psychic detective work for the FBI. The most high-profile case they helped crack was the San Luis Obispo co-ed murders. Linda said that by going into the energy field of the people involved, they were able to provide the location of the bodies and identify the killer.

But don’t expect the twins to be retiring any time soon.

“We keep finding expression in different forms of art and reinventing ourselves,” Linda said.

While they pay their bills as psychics charging $450 for an in-person reading, they’re very focused on their several side projects, including creating a collection of artwork, writing their second book and speaking at seminars nationwide.

Pieces from their “Original Angel Art Series,” will be available soon and are currently posted on their Web site. Referring to themselves as visual artists, they describe their work as a combination of painting, photography, and computer graphics. Unlike their psychic abilities, their artistic talents are purely genetic. Not only was their mother a painter, but also their father Philip Jamison is actually a world-renowned watercolorist.

“We have watercolor instead of blood in our veins,” the twins joked.

Last year, they published their life story in the best-selling book, Separated at Earth, and describe their next book as a how-to for developing one’s own psychic abilities. At their
seminars, they preach that we should all be tapping into and trusting our intuition more.

“There’s a lot of magic around us,” Linda said. “We like to help people become more open to the magic.”

And they’re not at all worried that people discovering their inner psychics might put them out of business.

“I think we have a mission to be the most famous psychics in the world,” Terry said. “But I kind of like being a little bit underground.”

With two successful, yet not-so conventional careers and two Temple degrees, it appears the modest Jamison twins may have four legs up on Miss Cleo.

The TECH Center will soon make 3-D printing available to all students.