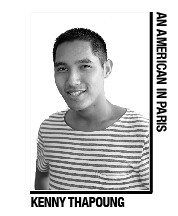 I refuse to leave France. If you see me walking across Broad Street from January until March, avoid me at all costs or else I will unleash my lack of Parisian life on you.  As amped as I am to get back to TU Alerts and all-nighters at the TECH Center, Paris has won my heart–cliché, but judge me.

There’s no better feeling than savoring that morning camembert cheese slightly melted on a bakery’s fresh croissant or knowing that you can pull off a solid C- and still be awarded credit at the end of the semester. Isn’t life just grand?

I’ve reached my one-month-left mark and the depression has begun to set in. To all of my friends who are begging me to come home to my old life, buzz off. Yes, my things-I-miss list could be mistaken for a grocery list, but other than my friends, there’s nothing I miss more than American-style food.

Don’t get me wrong.  I love scooping moist duck breast onto the backside of my fork and letting it glide along my taste buds while washing it down with a 25 cl glass of some imported red wine, but man do I crave some gourmet, gluttonous American food.

As I watched my 600-plus Facebook “friends” post statuses and pictures of their glistening Thanksgiving day meals, all I wanted to do was pound a shot of Tylenol PM and pray the next day came sooner. But then I realized, Paris is full of American options. As a cosmopolitan city–thank you transnational cinema class–Paris isn’t exclusively French. You can find hidden gems of Jewish, Turkish, and, uh, American restaurants.

Just because I’m in a city of fine culinary foods doesn’t mean I can’t enjoy a bit of greasy goodness now and then, or four days out of the week. If you’re ever feeling homesick for American bites, pop a squat in one of these American classics.

What a treasure. Diner-style food served at two locations in Paris. And just as its name suggests, breakfast is served all day, including breakfast burritos. Enjoy and refill your endless supply of American coffee and order yourself one of BIA’s juicy burgers, or go for a side of chili fries.  Student “formules”–set menus that include a set of food and drinks for a single price–are less than 10 euros and include a burger and small soda. Although it’s run by a man from Connecticut, he has yet to expand his free refills beyond his coffee. Expect to drop a solid 20 euros though if you spring for a root beer float or a slice of warm pecan pie with a scoop of vanilla ice cream.

This joint is very 1950s-esque and you’ll feel like Fonzie could stroll in at any moment.   I was tempted to splurge on a Members Only jacket for 150 euros, but I came for the food, not the attire. The fresh lemonade is watered down with sugar, but the size of its burgers more than makes up for it. If you need a picture, imagine taking the Student Center’s Dos Manos and renaming it Deux Mains. Even though I had to release one or two notches on my belt, I’d recommend BIA for the American atmosphere. But what sets Happy Days apart from BIA are its milkshakes–especially Oreo.

I don’t want to pollute your American minds with notions that all study abroad places come equipped with American nourishment. What I’ve discovered is that unlike people, you shouldn’t judge food merely on its appearance or name. Take a whiff through your nostrils and take a lick at that olive green stew.

How much more American can you get than overeating your weight with food?

A student narrates meeting a friend and conquering her fears during her first time travelling to Europe.

Columnist Kenny Thapoung offers advice on consuming alcohol en masse in France. “Dude, I completely blacked out last night.  What did we do?” “Yo bro, you got me.  I was just as crunk as you.”

Columnist Kenny Thapoung lost weight while abroad  and reveals his experience. I’m fat, obese, chunky, overweight, pudgy–all of the above. And that bulge on my stomach reserved for abs? Yeah, that’s my tubby belly. OK,