Students and faculty are excavating parts of the Underground Railroad. 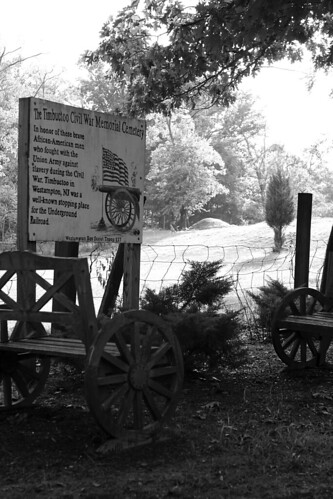 PAUL KLEIN TTN The Timbuctoo Civil War Memorial Cemetery lies in New Jersey. The location marks the site of an excavation site where students and faculty are digging up remnants of an Underground Railroad village, which could become a leading national African-American archaeological site.

Timbuctoo is surrounded by both ambiguity and dirt. Once a thriving safe haven for freed African Americans, the village, which served as a part of the Underground Railroad, is now partially concealed beneath the ground of a hill next to a Civil War cemetery.

From June 4 through July 3, a team of about seven Temple students and faculty members, as well as local community members, began excavating the site with plans to unearth the village and a piece of history. The excavation is known as the Timbuctoo Discovery Project.

The village, which lies in Westampton, N.J., approximately 22 miles from Main Campus, was founded in the mid-1820s. According to the Washington Post, researchers have said that much of Timbuctoo was likely abandoned in the early-1900s as a result of the Great Depression.

Plans to unearth the piece of land began much earlier than June, though. In 2009, Westampton Township hired John Milner Associates to conduct a series of geophysical surveys, non-abrasive tests to find out what was beneath the ground.

Chris Barton, the site manager and an archaeology doctoral student, said the group was looking for structures, such as sheds and houses, when it decided where the excavation would begin.

“We used that geophysical survey really to pick out what we call Future 13, the area that we excavated over the summer,” Barton said.

Barton explained that while there are only 13 marked graves at the Civil War memorial cemetery, the surveys show many more unmarked graves in the area, which he said are likely to belong to people who died in the Underground Railroad community.

Since excavating the site over the summer, Barton said that a seemingly circular settlement pattern of Timbuctoo is among the most interesting findings he has encountered.

“The overall just layout of the settlement pattern that these people of Timbuctoo chose to arrange their houses, [is not] really following typical white, or Anglo, concepts of settlement pattern,” Barton said.

People in the 18th and 19th centuries placed houses in the center of land – based off an idea of individuality, Barton said – but not in Timbuctoo.

Barton said that James Deetz, an American anthropologist, saw a similar phenomenon among freed African Americans in Massachusetts when he and a team excavated the settlement known as Parting Ways.

“Rather than continuing those ideas of individuality, they were trying to perpetuate this sense of community,” Barton said.

Barton also said this finding brings up a popular debate within archaeology and anthropology: whether people should look at African-American history through the beliefs of Melville Herskovits or Edward Frazier.

Herskovits, Barton said, argued that African Americans did not forget their culture when they were forcibly taken over.

Meanwhile, Barton said, Frazier argued, “African-American culture is based off of basically a loss of African identity, that racism, slavery were so persistent and had such devastating effects that [African Americans] lost all that cultural knowledge.”

“So when we see these circular patterns at Timbuctoo and a lot of people see it and say, ‘Wow, you know that’s a really persistent ethnic marker or Africanism,’” Barton continued, “I’ve argued that that circular pattern could be a way for people to protect themselves.”

Barton said he believes this circular settlement pattern allowed the residents of Timbuctoo to see and hear any potential threats, such as slave catchers.

Barton added that the village may have been founded before the documented mid-1820s date. Barton said many believe that William Boen, a freed slave who was born in 1735, may have lived in Timbuctoo before this time.

“He lived in that area between really Mt. Holly and, some people say, Timbuctoo, [or] that he may have actually lived in Timbuctoo and that’s before 1825,” he said.

Although the artifacts that have been recovered from the site are being temporarily held at Temple right now – with no final destination decided yet – Barton said Temple would benefit in another way.

“Timbuctoo has the potential to be one of the foremost African-American archaeological sites in the nation. With the continued involvement of Temple into this, [it] has huge beneficial ramifications for Temple,” Barton said. “It’s going to bring Temple itself, as well as the anthropology department, as well as archaeology at Temple, huge notoriety.”

There are plans to continue the excavation next summer with a full field-season, Barton added, with a possible visit to the site in the Fall.

David Orr, a professor from the anthropology department, will be returning as the adviser for the next field season, as well as much of the group from this summer’s excavation. Although there was little time to build his team with more people from Temple, Barton said he did hope to recruit in the future.

“Temple is very, very well-known for being one of the most ethnically and racially diverse schools in the nation,” he said. “And this work that we’re doing here really just reiterates that whole dynamic.”

Angelo Fichera can be reached at afichera@temple.edu.