After months of advertising and negotiating, Tristan Video on Liacouras Walk will not host a new diner. 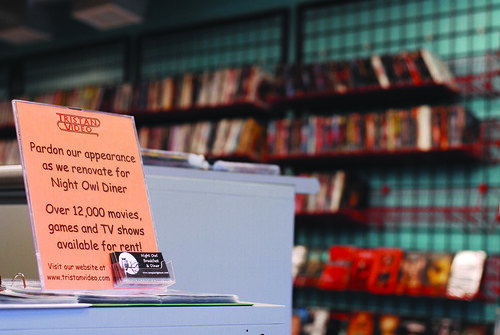 The success of a business is determined by a number of factors, one being the location. Tristan Video is no exception.

The video store on Liacouras Walk will postpone the construction of its anticipated diner, which was supposed to debut this Fall. The video rental store could be closed if a suitable spot for the diner isn’t found soon.

Tristan English, owner of Tristan Video, began negotiations with the landlord of Liacouras Walk last December about creating a 24-hour diner inside the video store, dubbed the Night Owl. To English’s dismay, after months of waiting for an approval, the landlord denied his business plan.

“I think he was stringing me along,” English said. Although the reasoning behind the landlord’s decision is unclear to English, he said he suspects the landlord did not want another dining outlet to compete with the existing ones in the area.

With a prime spot on campus unavailable to him, English began to hunt for a new location. His search brought him to the Edge. He discovered the residence hall was looking for a buyer to rent out the space next to Jimmy John’s.

English unveiled his new vision for the diner at the Edge with a July 13 post to the Night Owl’s website: “It will be more café style instead of diner, and it’ll include a performance space and lots of comfortable places to sit with couches.”

But the Edge also turned down English’s proposal.

At 2010 N. Broad St., the former house of the Tau Kappa Epsilon fraternity and the Owl’s Nest presented itself as another prospect for English after he was denied at the Edge, but the building had already been rented.

English said he remains optimistic but is running out of options.

He plans to meet with those behind the Beech Interplex Company’s new residence hall for international students, set to be located at 16th Street and Cecil B. Moore Avenue. So far, he has been unable to discuss his plans with them in person.

“They’re very busy, and it’s hard to set a meeting with them,” English said in an e-mail.

After Marisa Spanial, a sophomore marketing major, heard about the possible video-store diner during her Transnational Cinema class, she said she anticipated the café’s success no matter its location.

“Everyone walks on Liacouras Walk, but I think people are still going to go [to the café if it’s opened at 16th Street and Cecil B. Moore Avenue], especially a lot of kids who are not freshmen, like upperclassmen live over there as opposed to the residence halls,” Spanial said. “I don’t think [the location] will hurt the business that much.”

With the tentative location of the café changing nearly every week, the fate of the video store is uncertain. Tamar Godel, a junior education and theater major who has worked at Tristan Video for about a year and a half, said she fears the store may close if English cannot find a place to build the café.

“Video stores are going out of business,” Godel said. She said that without the help of a café’s profits, Tristan Video will probably close.

English might have to find someplace outside Main Campus, such as University City, to house his diner but sounded reluctant to do so.

“If I don’t get that [16th Street and Cecil B. Moore Avenue] location, I’ll continue looking for other places, such as the new residence hall on Broad [Street and] Oxford [Avenue],” he said in an e-mail. “But if there’s ultimately no space available anywhere near campus, I may have to go somewhere else, such as Drexel or Penn, and that’s certainly not good for the Temple population.”

To combat the store’s low sales, English lowered the regular rental price from $3.50 to $3 and extended the rental period from two days to a week. A new release costs $3 for a two-night rental, but English said he doesn’t expect to stock his shelves with many new releases.

Spanial explained that with the sprouting of Redboxes all over the city – there’s one inside Progress Plaza’s Fresh Grocer at 1501 N. Broad St. and at 7-Eleven on Liacouras Walk – people will be inclined to seek them out first, especially if English doesn’t have many new blockbuster hits.

“Redboxes are going to hurt him more than anything and the library has movies too,” Spanial said. “I always check the library first because it’s free.”

Kenny Thapoung can be reached at .

Music Director and Conductor of Temple University Opera Theater John Douglas, a professor at the university for more than 20 years, passed away this July.

Freshmen and upperclassmen alike celebrated the beginning of the new semester during Temple Fest, an annual meet-and-greet style tabling event.