With the beginning of another semester, incoming freshman are presented with a chance to get to know the city you now live in. We wanted to help make it easier on you with our Beginner’s Guide to Philly. 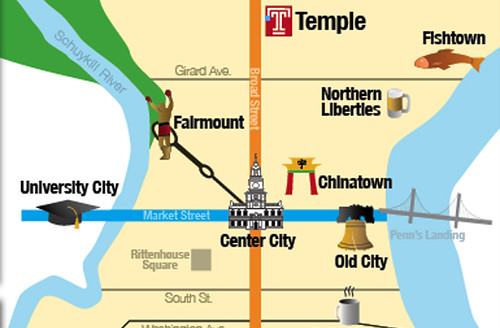 When the Phillies won the World Series, a mob of cheering fans ended up here in Center City, the true heart of Philadelphia. Center City has a lot to offer, from famous sites like the historic Independence Hall and the eye-catching Comcast Center, fun hang-out places like the Reading Terminal Market and beautiful Rittenhouse Square to the culture of the Avenue of the Arts and the Art Museum District. At the center of it all, there’s the architecturally splendid City Hall, with William Penn keeping a watchful eye over the city. Always busy and crowded with everyone from well-dressed businesspeople to kids on their fourth grade field trip, Center City is Philly at its best.
– Summer Beckley

Fairmount, also known as the Art Museum Area, encompasses Philadelphia from Girard Avenue to Spring Garden Street. The greenest ‘hood in the city also boasts one of the largest parks in the U.S. and famed solitary prison, the Eastern State Penitentiary (2124 Fairmount Ave.,   easternstate.org). Lesser known is The Bishop’s Collar (2349 Fairmount Ave.) for grub notably cheaper than the imported brews, and the Arts Garage (1516 Parrish St., theartsgarage.com), hosting shows and late-night parties weekly. For your last summer iced cream treat, visit Philly Flavors (2004 Fairmount Ave., phillyflavors.com), and kudos to Mugshots Coffeehouse (2106 Fairmount Ave., mugshotscoffeehouse.com) for its fair-trade coffee and addict-ability. The first Sunday of every month marks pay-what-you-wish admission prices at the Art Museum (2600 Ben Franklin Parkway, philamuseum.org), so you can spend a dollar for all-day gawking.
– Nikki Volpicelli

On the easternmost edge of West Philadelphia, within the 2 1/2 square miles stretching from the Schuylkill River on the east to 52nd Street on the west, lies the academically wonderful world of University City. Home to many of the city’s universities, including Drexel, Penn, University of the Sciences and the Restaurant School at Walnut Hill College, University City was given its name as a way to attract Penn faculty to live nearby. From art venues like the Esther M. Klein Art Gallery (3600 Market St., kleinartgallery.org) at the University City Science Center to Philadelphia’s famous dance company, Philadanco (9 N. Preston St., philadanco.org), the neighborhood boasts plenty of places to check out and things to do. There’s also a host of restaurants like Stephen Starr’s ever-popular Pod (3636 Sansom St., podrestaurant.com), or try the Ethiopian fare at Abyssinia (229 S. 45th St.) if you’re feeling adventurous. In addition to all the shops students would expect from an area surrounding their college or university, University City offers students living throughout Philadelphia a chance to explore a blend of collegiate and city life within one area.
– Lateef Amoo

Take SEPTA’s Orange line past South Street, and you’ll find yourself in a heartland of residential communities that are home to a large percentage of Philadelphians. East Passyunk Avenue covers the notable stretch boasting legendary cheesesteak titans Geno’s Steaks (1219 S. Ninth St., 215-389-0659, genosteaks.com) and Pat’s King of Steaks (1237 E. Passyunk Ave., 215-468-1546, patskingofsteaks.com), as well as a score of other bars and restaurants. Take the subway even further south, as far as you can, and you’ll arrive at the sports complex that is home to the Phillies, Flyers, 76ers and the Eagles. And along the Delaware River runs South Columbus Boulevard, where you’ll find major shopping centers.
– Kevin Brosky

While wandering the notoriously noisy South Street, veer south and explore the quaint and cozy neighborhoods of Bella Vista and Queen Village. Though the area appears to be largely residential, nestled between the quirky row homes and cobbled sidewalks are plenty of independently-owned restaurants, boutiques and coffee shops to discover. These villages, which are also bordered by Washington Avenue to the south, 11th Street to the west and the Delaware River to the east, also encompass the Italian Market, the U.S.’s largest outdoor market. But it’s not all spaghetti and pizza; the neighborhoods have seen a surge of Mexican and Vietnamese pockets, all of which are brimming with authentic cuisine.
– Maria Zankey

Looking to check out some historical sights in Philadelphia? Take a walk back in time, and travel to Old City, where cobblestone streets will lead you to historical attractions like Independence Hall, the Liberty Bell, the Betsy Ross House and the National Constitution Center. This quaint section of town has lots to see, though it does tend to be more upscale, with high-end shops that target tourists and pricy restaurants like Stephen Starr’s Buddakan. But don’t let a tight budget be a deterrent. Old City has plenty of beautiful parks and gardens and can be a great place to simply take a stroll. Also, be sure to check out First Friday, an event occurring every first Friday of the month, when Old City’s numerous art galleries are open to the public throughout the evening, often offering free, light refreshments and live music. Old City is a beautiful part of the city and great place to escape for the day.
– Grace Dickinson

Although only six city blocks, Chinatown is swarming with shops, more than 50 restaurants, markets and other various cultural, ethnic and religious sites. In this section of the city, however, not all the attractions are of Chinese relation. One can find everything from Japanese karaoke to Malaysian food and semblances of other Asian cultures in between. The area is also home to one of Philly’s premier concert venues, the legendary Trocadero Theatre. So if you’re in the mood for some bubble tea, saké (if you’re 21) or belting out some tunes with your Philadelphia neighbors, “come on down to Chinatown.”
– Kathryn A. López

A walk south on Second Street from Girard Avenue reveals the striking dissonance that characterizes the Northern Liberties neighborhood. On one side of the street, abandoned buildings and overgrown lots rule; on the other, the Piazza at Schmidts (Second and Hancock sts., atthepiazza.com), a multi-million dollar apartment, shopping and dining complex, sparkles. Northern Liberties, formerly the red-light district of the city, spent the last 10 years blossoming in a gentrification renaissance, but its Philly character and gritty facade hasn’t totally fallen by the wayside. You can still sit down for a brew at old neighborhood hangouts, like the Abbaye (637 N. Third St.). Or, drop by North Bowl lanes (909 N. Second St., northbowlphilly.com) for lip-smacking food, drinks and a sure-to-be buzzing social scene. As exploring goes, Northern Liberties is a prime example of the hybrid of old and new that gives such urban flavor to Philly’s fringe neighborhoods. Take a stroll west on Poplar Street, Brown Street or Fairmount Avenue, and you’ll be sure to spot signs of the old meshed with new development – and maybe even find a gem of a bar or bruncherie along the way.
– Morgan Zalot

Fishtown is the red-headed stepchild of Northern Liberties: She’s cheaper, scrappier and has a lot less teeth, but we love her anyway. If you get past her somewhat tough exterior, you’ll find a diamond with a lot less pretention than its relatives. Try Memphis Taproom (2331 E. Cumberland St., memphistaproom.com) for deep-fried dill pickles or Johnny Brenda’s (1201 Frankford Ave., johnnybrendas.com), epicenter of the Fishy earth, for nightly live music and plenty of craft beers, plus its circular, chalkboard-scrawled menu above the solid oak bar. If boozin’ ain’t your thing, check out Penn Treaty Park, where you can watch the boats sail down the river and remind yourself the grass ain’t always greener on the other side – of the Delaware.
– Nikki Volpicelli

Kevin Brosky can be reached at kevin.brosky@temple.edu

Due to growing concerns over COVID-19, Temple Athletics is suspending all varsity sports not competing in a “championship season” for at least two weeks.

Hao Luo’s “The Face of the City” exhibit is on display at the Clay Studio, located on 2nd and Quarry streets, until March 29.

NCAA athletes should see the benefits of their work