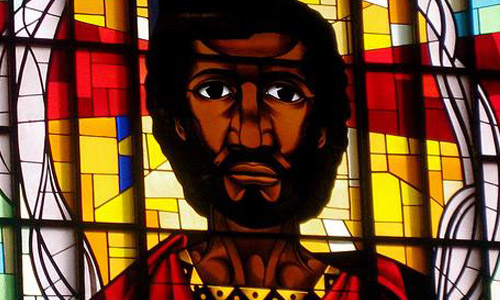 Soaring brick-and-mortar tributes to God can be found in any community. Churches especially permeate places that test faith and offer little hope, places like North Philadelphia. The imagery inside, however, shows that the God these houses are dedicated to may not

The Bright Hope Baptist Church sits at the corner of 12th Street and Cecil B. Moore Avenue. This structure, built in 1964 after the construction of Yorktown, serves an active congregation that was once led by William H. Gray, III, a prominent Philadelphia politician and one-time majority whip in the U.S. Congress. A large stained-glass window is displayed on the church’s Web site, depicting Jesus surrounded by glowing rays. This Jesus is shown just how he is commonly portrayed—kind, bearded and smiling. One thing is different, though. He is black.

Now, Jesus could actually have been black. Some schools of thought point to evidence that early Jews may have been at least partially black. Regardless of what the historical Jesus looked like, however, churches and religious paintings and symbols depict him in dozens of different ways. These vary from the traditional crucifixion scene to more contemporary, and often less frightening, images.

Depictions of Jesus and almost any other religious figure change over time and place, in order to fit the mood, so to speak. What Jesus looked like in real life is not completely clear, and that makes depicting him in different ways easier. Even if the world knew precisely what he looked like, I doubt that he would be depicted the same everywhere. Religious figures, whether they are saints, gods, martyrs or angels, give us comfort, and their stories are told to give us some spiritual connection, or at the very least, a social connection.

These stories lose their meaning and their ability to connect to us when they do not reflect ourselves. A story of European monks who were trying to convert people of color shows what happens when people do not see themselves in their deities.

The monks were appalled when they were told that these people preferred hell to heaven. A painting that depicted the two eternal worlds turned out to be the culprit. It depicted heaven as a place populated with austere, pale people, who lived in the sky. Hell, on the other hand, was shown as a place that had a lot of bonfires, and that was populated by dark-skinned people.

It isn’t hard to see how anyone would rather live in a place with warmth and people who at least partially resembled themselves rather than a bizarre foreign land filled with stone-faced strangers.

Perhaps it is better this way, with people who claim to worship the same God depicting him in sometimes drastically different ways. Even if we knew what Jesus looked like, depicting him that way would hardly make him more real to the millions of us who say they believe in some form of God — 86 percent of American adults, according to a recent Gallup poll.

For God, or religion in general, to serve any worthwhile purpose, he first needs to connect to the people who are searching for meaning in his story.

Call us old fashioned, but we think paper paychecks are a pretty easy, efficient way to receive our work payments. Clearly, Temple doesn’t think so. According to them, paper is nothing but bad news. That’s

The Fletcher Street Urban Riding Club has taught Black boys about horses for the past century.

Dawn Staley has ‘homecoming’ to Temple

Staley, who coached the Owls from 2000-08 and grew up in North Philadelphia, guided the University of South Carolina to an 87-60 win on Thursday at the Liacouras Center.