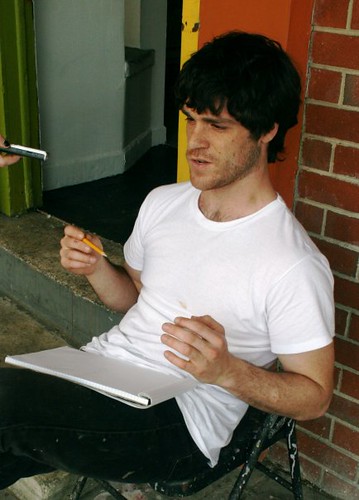 On a sunny Saturday afternoon in South Philly’s Italian Market, Phil Coty, 24, sits outside of his art gallery, Bobo’s on 9th, listening to the radio and writing “Aw, shucks!” on a piece of graphed notebook paper. Whenever anyone passes by, he looks up and hopefully asks, “Hey, you wanna see some art?”

Coty, a lean guy with shaggy, dark brown hair, the beginnings of a beard and assorted stains and rips on his white T-shirt and fitted black jeans, is the keeper of one of the city’s best – and most colorful – secrets, an ever-unconventional gallery that also serves as a venue for performance art and music. It’s an easy spot to miss from the road – hidden behind stacks of empty crates and barely marked, except for a spray-painted “Bobo’s on 9th” – but the art it houses is anything but forgettable.

“We got the space off of Craigslist,” Coty said. “It used to be a barber shop. We just wanted someplace where we could show our friends’ work.”

“We” refers to Coty and his friends, Nick Payne and Drew Gillespie, both 25. All three are graduates of the Rhode Island School of Design, members of the “weird pop” band Bobo and owners and curators of Bobo’s on 9th, which they baptized with its first installation this past July. Seven more installations followed, along with parties, concerts, a couple of rather messy performances and a visit from the Secret Service.

“We made a whole 10-thousand dollars’ worth of counterfeit money and set up an office overflowing with money in our window display,” Coty said. “It all got confiscated. It’s really interesting having a window display for art because you can use the whole space, create a life-sized diorama of sorts. It really helps us get our ideas out on the street – literally.”

Currently showcased in the Bobo’s window display is a sleeping man, whose body is made from a windbreaker and ski pants stuffed with empty soda bottles, crushed beer cans and other recyclables. His feet are a pair of hiking boots and his bed is a pile of VHS tapes. Inside the gallery, a labyrinth of brightly painted walls takes visitors on a journey to another world – one much more socially and politically conscious than our own.

The word “ABORTIONS” is painted in red beneath a scene of a college dorm room with a bunk bed made from intestines. Sperm, peace signs, hamburgers and cassette tapes float in a surreal skyscape. A man lying on a black-and-white tiled floor has what looks like a giant snake wrapped around his midsection – a giant snake with an oversized human hand for a head.

Bits of poetry and Beatles lyrics – “All you need is love” – are interspersed with images of war and decay, naked women reading books, a glowing, Buddha-like dog and assorted American icons, from TV sets to “black power” fists. The exhibit has a mosaic feel to it, but at the same time, nothing seems random – even the most unusual juxtapositions of ideas somehow carry a sense of purpose.

The work is that of Providence, R.I.-based artist Barkev Gulesserian, a friend of Coty and Co. from RISD. Though Bobo’s on 9th has only featured installations by friends of the owners so far, Coty said that they hope to branch out and eventually show the work of others. Up next for the gallery is an exhibit at Foxy Production in New York City’s Chelsea neighborhood, which they plan to operate from their Philadelphia location, manning the lights and special effects through computers.

“Hopefully, the show in New York will bring us some attention from New York artists and some possible overlap, which is what we’re really looking for – an overlap of the Philly art scene and the New York scene,” Coty said.

As far as the Philly art scene is concerned, Coty said he thinks it’s much too commercially driven. At Bobo’s on 9th, art is shown for the sake of showing art – not for making money. The owners, who all work day jobs, help install and pay for each exhibit – just as long as the exhibit gives them something in return.

“We consider ourselves a sponge, and we consider every artist we showcase as some kind of organism that leaves a residue on our space,” Coty said. “The ceiling we have now, for instance, is from an earlier show. And there’s pigeon s— on the building. Our last show was about birds, and we had put out all this birdseed, and pigeons started living above our door and walking into the gallery and stuff like that.”

He smiled, thinking back on it. “And now they’re all gone, but the s— is still there. Isn’t that perfect?”

.Old City Coffee’s roast is far from the average Joe