They’re everywhere, it seems, endlessly clogging the “new release” shelves at every Barnes & Noble in the land (and, if his taste in psuedo-serious film scripts is any indication of his literary preferences, all George Clooney’s shelves, as well). From John Buchan to W.E.B. Griffin, from Orson Wells to Daniel Craig, we just can’t get enough spies.

But spy stories, in case you were unaware, aren’t very old. Pretentious purists will refer you to James Fenimore Cooper. But for all intents and purposes, the spy story as we know it today didn’t appear until the early 20th century. With the exception of a few classics, it didn’t really hit its stride until World War I.

That a literary genre has managed to capture our imaginations in just less than a century is a testament either to the power of its writing or to the absolute insanity of that century’s politics. Given my familiarity with the literary merits of most spy stories, I’m inclined to go with the latter.

Our new century hardly seems to have ushered in a new era of simplicity in global politics, and the spy story is perhaps as current in the post-9/11 world as it was at the height of the Cold War. Confronted with an international political scene that seems beyond the reckoning of even our most advanced minds, we readers of spy fiction need the comfort of knowing that someone is able to figure it all out — if it’s even possible. 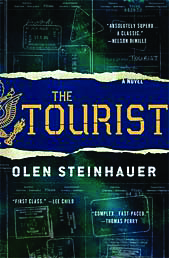 This need is perhaps all the more pressing in the uncertainty of the 21st century, as we find ourselves immersed in a war on terror. We’ve long since given up on the James Bonds of espionage — but knowing we had a George Smiley or two on our side would go a long way toward buoying hope in a world that appears to be increasingly hopeless.

Enter Olen Steinhauer, author of The Tourist and one of the first true post-9/11 spy novelists. The Tourist isn’t his first novel — he’s already a two-time Edgar Award nominee — but it is his first to really hint at the shape of spy stories to come, to begin the first reinvention of the spy since John le Carré’s The Spy Who Came In From the Cold revolutionized the genre in 1963.

The tourist is Milo Weaver, you see, and Milo is just as confused as any of us. That confusion is key: he’s not jaded, really, and he’s not disenchanted with the West. Milo Weaver, like the rest of us, just doesn’t really have any idea what’s going on anymore.

The book begins on Sept. 11, 2001, but the attacks on New York and Washington have little direct impact on its action. Sept. 11 also happens to be the day Milo got shot, the day he met his wife and the day he thought he’d been finished as the book’s eponymous “tourist.”

Exactly what a tourist is never becomes entirely clear (nor does anything else in this book, to be fair), but a general picture can be imagined. Somewhere between 007 and a hired thug, a tourist does whatever the CIA needs him to do and doesn’t let anyone know about it. From a strictly technical point of view, a tourist doesn’t actually even exist.

But Milo does exist, as do his wife, his step-daughter, his house in Brooklyn, N.Y., and his ungainly gut and his frustrated boss. For most of the book, Milo must negotiate the unsteady ground between his old role and his new one, maintaining what, in the end, proves to be an unsustainable balance.

As far as plot goes, The Tourist is as unoriginal as most spy stories: a man who appears to know too much (although in truth, knows next to nothing) is on the run, uncertain of whom he can trust.

Of course, the best spy stories don’t rely on original plotting. Instead, they exploit the uncertain ground of espionage to comment on the modern condition, like that of Le Carré’s and of Graham Greene before him.

Had he written The Tourist, Graham Greene would’ve called it “an entertainment,” a label he affixed to a number of his early forays into the spy genre. Like Greene’s entertainments and Le Carré’s earliest work, The Tourist is a flawed work that fails to achieve the literary standing both authors’ later spy stories would.

But a spy story need not be The Quiet American or Tinker, Tailor, Soldier, Spy to be worth reading. The Tourist isn’t, and it’s certainly still worth any discerning reader’s time. Indeed, the most discerning reader will certainly keep an eye out for Steinhauer’s future work, hopeful that this talented young writer will once again take the spy story to great, new heights.

Temple unnecessarily spends $115,000 on advertising to deliver the facts.

Plisko puts the pieces together

The junior golfer has found more than his swing this past offseason, winning the Bermuda Match Play Championship in March. The win helped him gain confidence and gave coach Brian Quinn the sense that Plisko could one day go pro.