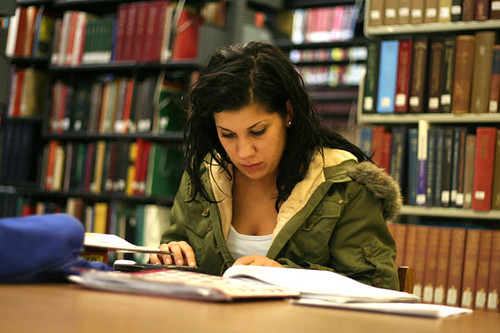 Libraries evoke images of tall shelves stacked with books and scholars spread out over mahogany desks, pouring through pages, discovering secrets and solving the problems of humanity. Paley Library on Main Campus is no different.

In one week, more than 42,500 students walk through Temple library doors, said Carol Lang, assistant librarian for organizational development and planning. Students check out upwards of 300,000 materials in one year at Paley and the libraries at the Health Sciences Campus, Ambler and Tyler.

Anne Harlow, a reference librarian at Temple specializing in music, dance and theater works at Paley every day and said she noticed a difference in Temple students among other college students. She observes many students and is optimistic of their potential.

“There is a creative and intellectual energy here that’s absolutely vibrant,” she said in her library whisper.

Harlow came to Temple after working at Rowan University and the Curtis Institute of Music. She claimed that academically, the students here are on a higher level. She said she enjoys her job because of the intellectual stimulation.

Harlow said the library is a great place to ask questions and get work done. “Working with this age group gives me hope for the world,” she said. “I like helping young people in this age when they’re just starting to be young adults.”

Freshman pre-nursing major Jack Kittel would make Harlow proud, as he visits every day solely to crack the books.

“I’m the most productive I’ll ever be in the library,” he said. “I can’t do it anywhere else.”

Akai Whitt, a graduate pre-med major, finds herself in the library usually three days a week, for four to five hours, to pass time between classes. Like Kittel, she prefers to go there to study. However, some people may have forgotten how to use their library voices.

“It’s getting to be loud here,” Whitt said. “It’s not so much a preference anymore.”

David Dillard, another reference librarian specializing in medicine, public health and kinesiology said that libraries are moving away from being quiet. He sees the library as a place to get out and mingle.

It could be that Whitt sits in the wrong wing of the library. Students generally agreed that the eastside of the main floor is considerably quieter. Computers and private workspaces can be found on this wing. It is also the reference book area, which makes it ideal for research.

“Due to that, there aren’t a whole lot of spaces,” Whitt said.

Dillard explained that the second and third floors are the quietest areas, designated by signs.

Freshman undeclared major Foong Su said the upper levels are almost too quiet, to the point that they’re creepy.

“I’m afraid to breathe,” she said.

This division of west and east is literal and figurative. There seems to be a difference in the people that come to study compared to those who comprise the social arena.

Junior political science major Meaza Iyassu spends four to five hours in the library every day. She said that although she does study occasionally, most of the time she socializes.

“I don’t know anywhere else I’d rather be,” she laughed.

Iyassu meets her friends there to chat and play cards. She added that the library is a good place to be when your mood shifts.

Su agreed, and said it is easy to switch from study mode to social mode and get everything done at once.

However, Dillard expressed that those who come to do serious research have priority at Paley.

“They’re most important to us as librarians,” Dillard said.

Location can be a factor in a visit to the library. Students have their own reasons for choosing certain corners.

Iyassu observed a separation in the groups that congregate in the west wing. She noted that people tend to associate with only their own race or ethnicity.

Iyassu was not the only one to see segregation among library patrons. Su said that most people see their groups as a comfort zones where they can relate to each other.

“You subconsciously think of others as unapproachable,” she said. “You don’t know what the other people think of you as being different.”

Freshman and pre-nursing major Viboll Sotha sees the comfort zone as a good starting point, but that people should branch out from there.

Dillard said the separation shouldn’t be attributed to race directly. He said he believes students join the group with which they feel most comfortable.

“They cluster with people they know,” he said.